When climbing vertically, a lovebird parrot has an extra leg at its disposal: its beak, according to research by Melody Young and colleagues.

Woodpeckers, nuthatches, treecreepers, parrots, and parakeets: all these birds are able to move up against a tree trunk. Woodpeckers, nuthatches, and treecreepers do so by hopping forward, both legs briefly releasing from the ground simultaneously. Parrots and parakeets do it differently. They clamber – using their beaks as a third leg, as Melody Young and colleagues show.

Everyone has observed parrots and parakeets using their beaks when climbing up. But do they really use their beak as a leg, or just for support and balance, in the same way as birds often use their tail? To find out, Young investigated the climbing skills of the rosy-faced lovebird, Agapornis roseicollis, a parrot from Southwest Africa.

She brought six animals into the lab and let them walk across a runway at different inclinations. She filmed their gait with a high-speed camera and measured the force that legs, beak, and tail exerted on the substrate.

The lovebirds often used their beak and tail when walking if the runway was set up steeper than 45° inclination. If it was positioned vertically, beak and tail were always necessary. In that case, the beak functioned as an extra leg, as it turned out. The animals put both legs and beak forward in turn: right leg, left leg, beak, right leg, left leg, beak. Measured forces also showed that the beak plays a similar role as the legs in propulsion.

The tail helps support and balance the bird.

Parrots have given their beak a second function as an extra leg to climb with. The neck muscles must also have been adapted to this new task. 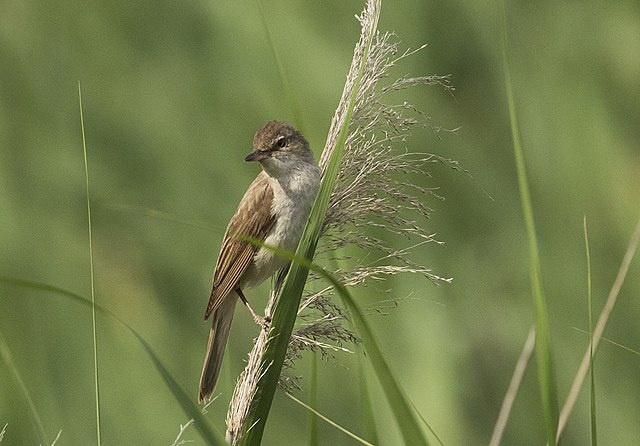 Young aphids try to hitch a ride on adults 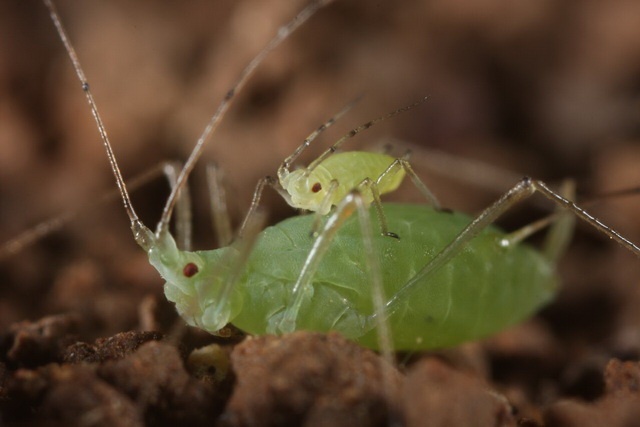 Young pea aphids demand a piggyback ride on the back of an adult when they have to walk on the soil, Moshe Gish and Moshe Inbar report. But they don’t always get what they want, because the adults try to remove them.

When their host plant starts shaking and a warm, moist air is blowing over it, sap feeding pea aphids (Acyrthosphon pisum) are in danger: a mammalian herbivore is approaching. Just before the plant is eaten by the grazer, they massively drop off the plant to the ground to escape. But they are not safe there either; they can be trampled, dessicate, starve or fall prey to predators that hunt on the ground, like spiders. And so they start walking in search of a new plant.

That is not easy for young aphids (the nymphs). The ground is bumpy with clumps of soil, cracks, stones, fallen twigs and leaves. The young critters are moving much slower than adults. But there is a solution, Moshe Gish and Moshe Inbar discovered: piggybacking on a large aphid.

In a series of lab experiments, the researchers simulated escape scenes. They placed about ten female aphids on a fava bean plant. Next morning, young aphids had been born; pea aphids can reproduce parthenogenetically, females giving birth to daughters without having been mated. By tapping the plant and exhaling over it, the researchers induced the aphids to drop off. At some distance from the fava bean plant, a circle of lentil plants was placed to offer a destination, the bottom was covered with soil.

A tiny drama takes place in such a case, as the researchers observed. Immediately after landing, young aphids try to climb on an adult. They also climb on green plastic beads and on dead aphids that they happen to stumble upon, but from these, they quickly disembark. If a living aphid stays immobile after they climbed on, they get off after a while too. But when their carrier starts walking, they ride to a new plant, where they arrive faster than when they would have walked the distance on their own.

But adult aphids are not really willing to help young ones.

On the contrary: passengers seem to be a nuisance to them. When a nymph tries to climb on an adult aphid, this aphid will often raise its body to make it difficult, or it runs away. If there are already nymphs on its body, it often stays motionless, waiting until the passengers leave. Or it repeatedly lowers its head or posterior end to the surface to get rid of them. The back is the best place for a nymph to sit on. Eventually, an adult aphid will start walking with one passenger at most.

Once it has left, after a delay, it will reach a new plant as soon as an aphid without a hitchhiker, so the walking speed is not affected by the burden. But it is energetically costly to bear it.

Also these tadpoles try to catch a ride 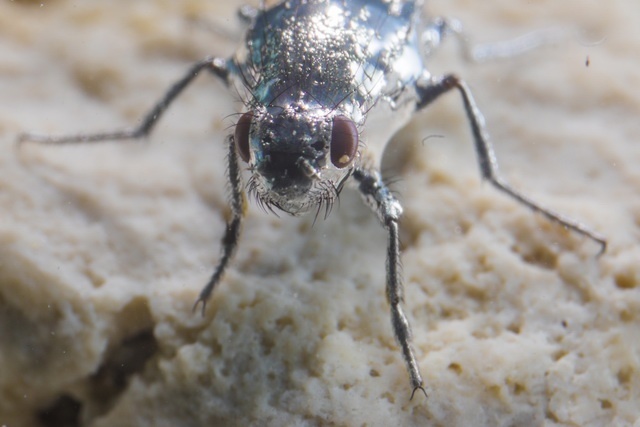 Each insect would drown in Mono Lake, a saline soda lake in California. Each insect, except for the alkali fly, which has unique adaptations to survive the extreme environment, as Floris van Breugel and Micael Dickinson show.

Only bacteria, algae and brine shrimp tolerate the saline water of Mono Lake in California- and the alkali fly Ephydra hians, which flourishes here. It is an amazing critter. The larvae develop in the water, feeding on the algae. Adult flies, which occur in great numbers along the shores, regularly crawl into the water to feed on algae or to lay their eggs. They are the only adult insects that are able to dive into the briny water and emerge alive, Floris van Breugel and Michael Dickinson report.

Several insect species exist that survive submersion in the water of lakes or streams, thanks to a water-repellent layer of hydrocarbons (waxy substances) on their cuticle and tiny hairs that trap a layer of air. But they would be wetted and drown in Mono Lake. That is because the water of this lake contains a large amount of sodium carbonate, a salt known as baking soda, the presence of which renders the insects incapable of keeping the layer of air intact; such water is ‘wetter’ than pure water and penetrates into the layer of air. Sodium carbonate is one of the substances that make the water strongly alkaline.

But the alkali fly easily dives into the alkaline water and when it emerges, it is completely dry. The researchers show that this is possible because the diving fly possesses a very dense mat of hairs and a layer of superhydrophobic hydrocarbons which, combined, prevent wetting. Upon entering the water, a stable air bubble forms around the fly, which enables it to spend 15 minutes underwater; the bubble protects it from the hostile water and offers a supply of oxygen.

In the past 60,000 years, Mono Lake became more salt and more alkaline because it has no outlet, and as water is evaporating, the concentrations of mineral salts gradually rise. Limestone columns, named tufa, developed, along which the flies descend below water surface.

The alkali fly’s ancestors had to enter the lake to forage in a time when the lake was still fresh and algae were the only food available, the authors hypothesize. While the lake gradually became more alkaline, the fly adapted to the new conditions. Nowadays, it can safely graze underwater, as no fish predators occur. The flies are preyed upon by many birds that forage near the lake, like gulls.

When oil, from decaying organic matter or sunscreen and other cosmetics, is floating on the water, even the alkali flies are wetted and drown, in spite of their unique adaptations.