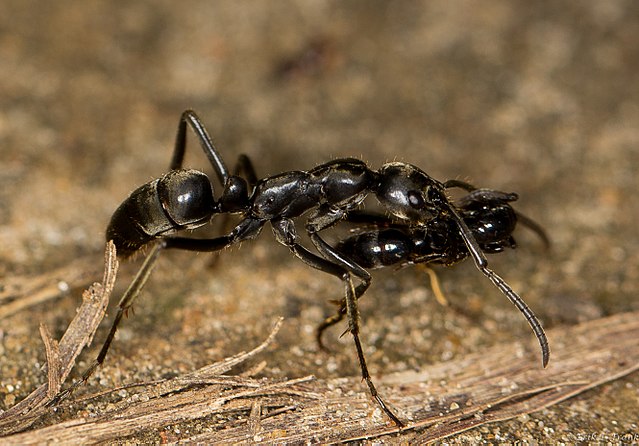 Groups of the African ant Megaponera analis undertake hunting parties that are risky because of the fierce resistance of the termites that are attacked. Some ant workers get injured, but they are carried back to the nest and treated if possible, Erik Frank and colleagues report.

Workers of the large African ant Megaponera analis, also known as Matabele ant, face a heavy task. The ants prey on termites that they detect and overpower at their foraging sites. The ants approach the termites in a column formation consisting of hundreds of individuals. When the first ants reach a site, they wait until all participants have arrived and then they attack. The large individuals, the majors, break open the protective layer of earth that covers the termites’ foraging site; the small ants, the minors, then go inside to seize, kill, and pull out the termites.

And that is a risky job, as Erik Frank and colleagues write. Termite soldiers with strong head and mandibles will fight fiercely. Some ants, almost all of them being minors, get injured; some ants are bitten off one or more legs or antennas, others are hindered by a termite that clings to them.

The ants limit losses by rescuing many injured nest-mates. After the fight, the ants gather before they jointly return to the nest, because an ant travelling alone easily falls prey to predators, for example spiders. Majors run over the place to pick up and carry dead termites and nest-mates that lag behind. If all ants have joined the column, they start walking. But ants that lost one or two legs and ants with a termite clinging to them are unable to keep up with the group, according to observations and experiments in the field and in the lab. By excreting certain substances they signal to others that they need help.

Majors that are not yet carrying anything will pick up these lightly-injured nest-mates, which tuck in their legs to facilitate transportation.

Ants who are severely injured and can no longer stand on their legs, don’t emit an emergency signal and they don’t let themselves to be picked up: they keep on twisting and turning. These unhappy ants are left behind, so that only victims that have a chance to recover are taken home. Almost all of them safely reach the nest, whereas without help many injured ants would not be able to complete the journey.

As soon as the victims are brought into the nest, they are taken care of. A termites that clings to an ant mostly is pulled off successfully and the ant doesn’t suffer any long-term consequences of the adventure. An ant that lost a leg or antenna receives a thorough treatment: nest mates groom the open wound for a long time, cleaning it and probably also applying antimicrobial substances that they produce in special glands. Experiments show that an ant with an untreated open wound almost always dies, probably due to an infection. But when treated, it usually survives and it will learn to walk on four or five legs as fast as the others – and soon enough, it will join termite raiding parties again.

When heavily injured ants are brought in, which happens only infrequently, they will get no treatment, but are carried out of the nest instead. The ants only help injured nest mates that will survive.

The rescue behaviour in Megaponera analis is unique. It could develop in these ants because they conduct short and space-limited raids on a dangerous prey. There are many casualties, but the injuries are rarely fatal when the victims get help – and help is available. Without rescuing behaviour, the colony would be much smaller and fewer workers would be available to join a raiding party. To give an idea of the importance: the number of ants that are rescued on a day roughly equals the number that is born.