Thousands of copepods are ingested each day by little auk 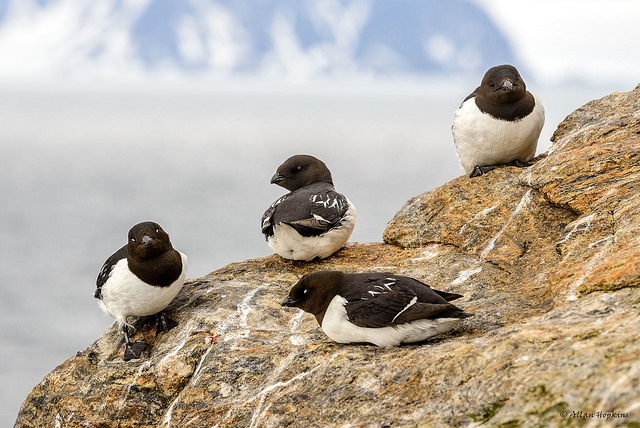 Little auks have a way to gather food that is unusual in birds, Manfred Enstipp and colleagues show. The birds feed ‘almost like a whale’, as the title of  their publication suggests.

The little auk (or dovekie), a seabird species of arctic regions which gathers its food while diving, does not have easy prey to catch. It feeds mainly on copepods (small crustaceans) and it needs an estimated 60,000 prey items per day. It is difficult to capture these tiny animals, as they respond to threats with fast movements. It’s difficult to grasp something as small like copepods under water anyway: the object is pushed away when you try. How does a little auk get all the copepods it needs?

Just by opening the beak while swimming and filtering the prey from the water, Manfred Enstipp and colleagues assumed. But when they filmed little auks with a high-speed camera in a test pool containing copepods and analysed the footage, their idea turned out to be wrong.

Little auks, as the researchers observed, search for copepods with their eyes. Upon prey detection, they go after it, stretching their neck. They extend their gular pouch so that under pressure arises in the oral cavity, and open their bill slightly. As a consequence, a big gulp of prey-laden water is sucked in. The bird then retains the prey while it expels the excess water through the nostrils and from the back of the bill. The whole procedure takes about half a second. By capturing prey in quick succession – and with some luck it sometimes has two items in one trial – a little auk gathers its food.

Many fish species use this ‘suction-feeding’ method to catch prey, but for a bird it is unusual. It is reminiscent of the way baleen whales feed: they take in large quantities of water and expel it through the baleens, retaining the plankton.