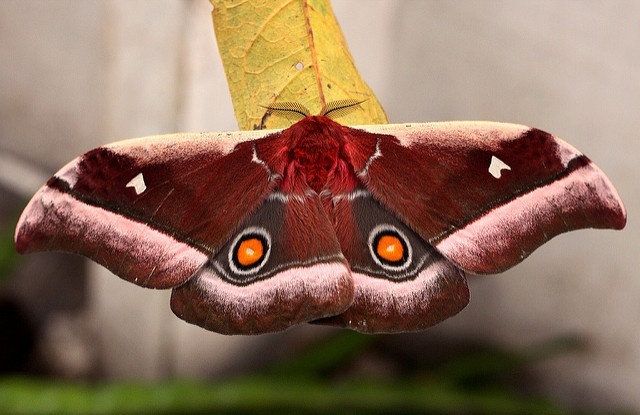 Scales and furry coat of the moth Bunaea alcinoe thwart the searching method of hunting bats, as Zhiyuan Shen and colleagues show. That is how it manages to make itself undetectable.

Moths, which fly around at night, have to deal with agile enemies: bats. These predators find their prey by emitting high (ultrasonic) calls and hearing the echo of their sound when it is reflected by a wall, a tree – or a moth. This ‘echolocation’ enables them to localize a moth and find out in which direction it goes, and then they can catch it.

Moths have developed different ways to escape from these enemies. Some hear the bats’ sounds and quickly change direction; others produce a sound by themselves with which they startle or confuse a hunting bat; still others have wings that distort the echo.

Another defence strategy is to absorb part of the bats’ sounds, preventing their reflection. That idea is applied by Bunaea alcinoe, the cabbage tree emperor moth which lives in Africa, as Zhiyuan Shen and colleagues show.

The numerous scales that cover the wings of this moth are responsible for the absorption. The scales, which look like leaves on a pedicel under a microscope, have a regular, very open nanostructure. Thanks to this structure, they can vibrate exactly at the frequencies of the bats’ sound, the researchers show. The sound waves are transferred to the scales, where they are extinguished by friction: acoustic camouflage against bat echolocation.

Butterflies, which are active during daytime and are not hunted by enemies that use echolocation, have scales on their wings with a different nanostructure, that do not vibrate at the frequency of bat calls.

Another feature is the striking hair growth on the backside of the moths. That furry coat also absorbs sound, in the way curtains and carpets do.

As a result, bats have difficulty finding this prey, Bunaea alcinoe, as only a part of the sound of their calls is reflected when it hits a moth.