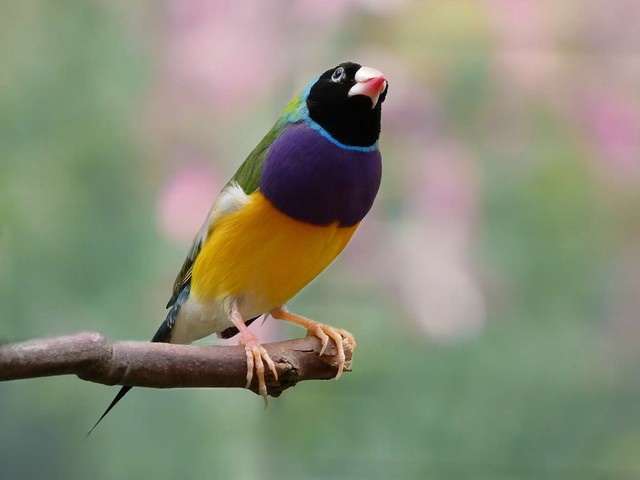 When Gouldian finches have to drink, not every bird is willing to leave the safe trees first. There is a pattern in the order in which they venture to a waterhole, Andrias O’Reilly and colleagues show.

Drinking water is a perilous adventure for the Gouldian finch, a songbird from north-western Australia. It is a colourful species. If the birds are on the ground near a creek or pond, birds of prey will spot them easily, so they are less safe there than in the trees. But they have no choice: they have to drink. Once a day, early in the morning, they take the risk, coming in flocks. Some of them are more courageous than others, as Andrias O’Reilly and colleagues saw.

That was already known from experiments in the lab. Gouldian finches have different head colours; most birds (70 percent) have a black head, others (30 percent) a red one and a few (less than 1 percent) a yellow one. Research had shown that the colour is linked to personality: animals with a red head are more aggressive, whereas black-headed birds are more explorative and more courageous. The researchers wondered if this is also the case in the wild. If it is, a difference in courage should be visible in a risky activity, such as drinking water.

So, they observed the birds at their daily drinking party and noted what type of bird descended first to the waterhole, taking the greatest risk. They conducted their research at the end of the breeding season, when the young had fledged.

Apparently, Gouldian finches are no heroes. They will not land on the ground to drink untill other birds are present at the waterhole. If no bird is there, they will remain in the trees and wait for other birds to appear.

Only in that case, they dare as well. And then, the black-headed birds are most likely to take the lead, as it turned out. That is in agreement with what was found in the lab. The black-headed birds run less risk because they are less conspicuous than the red-headed ones, the explanation is.

Young birds have not yet full colours and are even less conspicuous. Still, juveniles let the adult birds precede; probably the young birds are more cautious because they have little experience.

At the start of the research period, mainly females are the first birds to descend to the water. Fathers primarily care for the young for a while after fledging; during this period, males will stay with the cautious young, so females have to take the lead. And the black-headed females will take it.

A brave great tit probably is either big or hungry 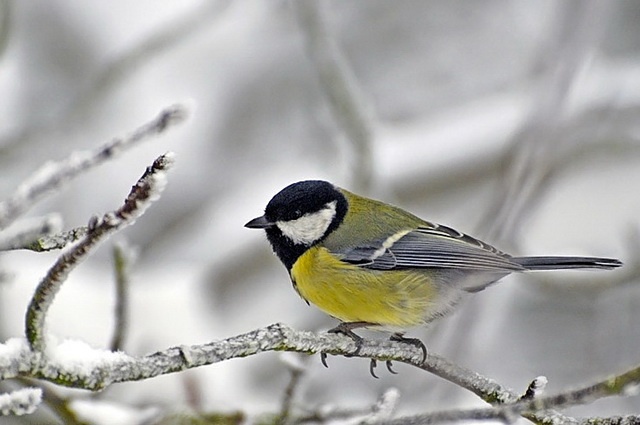 How much risk is a great tit prepared to take? The answer differs greatly among individuals. Maria Moiron and colleagues show that how much the courage the birds exhibit, depends on their size and condition.

Just like humans, animals have a personality, a stable set of coherent behavioural traits. For example, animals differ from each other in how brave they are, the extremes being an aggressive, brutal, curious and enterprising character on the one hand and a shy, cautious and withdrawn nature on the other. As biologists pointed out, these personality types also occur in the great tit (Parus major). Maria Moiron and colleagues wondered if the personality of a great tit is linked to its physical characteristics.

To find out, they weighed a number of males and measured the length of leg, beak and wing. Also, they tested the animals for their willingness to take risks by assessing how aggressive the animals behaved to another male, which intruded into their territory. They also tested how quick they were to explore an unfamiliar test cage.

Great tits differ greatly from each other in all triats measured, as it turned out. After a statistical analysis of the data, the researchers conclude that large individuals on average are less anxious than smaller conspecifics. That may be, they speculate, because a large animal has a greater chance of winning when it comes to fighting and will be hurt less severely. An alternative explanation is that it will take more risk in acquiring food because it needs more energy.

Another finding is that the condition of the birds, in the sense of their energetic reserves, also determines their behaviour. An animal in need of some food generally takes more risks than an animal that is well-fed. A hungry bird cannot afford to be careful, it has to take action, the authors explain. It is also possible that a well-fed bird is more cautious because it has more difficulty taking off in case of danger.

Conclusion: the personality of a great tit is indeed related to its physical characteristics. That is not unexpected – but it had not been demonstrated before.

Sea anemone grows better with a shy clownfish around The strength of the mutualistic interactions between sea anemones and clownfish depends on the personality of the fish, Philip Schmiege and colleagues report. A shy, cautious partner benefits a sea anemone more than a bold, venturous fish.

But the fish deliver extra services. Many sea anemones harbour unicellular microorganisms that, like plants, are able to capture sunlight and to use it to convert carbon dioxide into carbohydrates. They feed these carbohydrates to the anemones in exchange for residence. The microorganisms derive their nutrients from waste products of the clownfish. Moreover, by moving, the fish refresh the water around the sea anemones continuously, guaranteeing the availability of oxygen. By fertilizing the unicellular inhabitants and refreshing the water, clownfish promote the growth of sea anemones.

Now, clownfish, like many other animal species, have personalities. There are bold, venturous individuals as well as shy, passive ones. It matters to the sea anemones what personality the fishes have that associate with them, Philip Schmiege and colleagues assumed. And they proved to be right.

The researchers brought some wild-caught orange clownfish (or clown anemonefish, Amphiprion percula) into the lab, a species living along coasts of Australia, Asia and Japan. Also, they had grown bubble-tip anemones (Entacmaea quadricolor). Though this is not a natural partner of the fish, they associate readily in the lab.

In each of sixty tanks, the researchers placed one anemone and one or two fish; in the field, zero to six fish associate with one anemone. They measured the size of the anemones and kept track of their growth. Also, they examined how bold or shy each fish was by videotaping its activities every day during twenty minutes and assessing from the footage if he ventured away from the sea anemone. The more time a fish spent away from his partner, the bolder its personality.

After eighteen months, the biologists noted a difference in the growth of the sea anemones. Anemones associated with a shy fish had grown better than anemones with a bold partner. Apparently, shy fish supply better services. Because they remain in close proximity to their host anemone, they fertilize its unicellular inhabitants better and refresh the water more efficiently. And perhaps the anemones dare to expand their tentacles for longer periods of time to catch food as long as there is a clownfish nearby.

In conclusion: the strength of mutualistic relationships, of which the association between sea anemones and clownfish is an iconic example, depends on the personality of the partners.