Scallops see thanks to hundreds of tiny mirrors 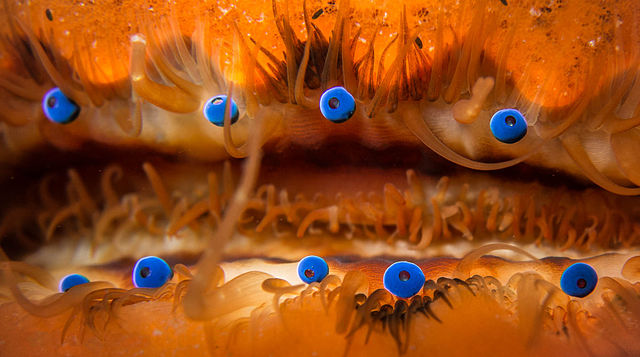 If a potential predator is in sight, a scallop moves away. It sees the danger with special eyes, which don’t use a lens for image formation, but a concave mirror instead. Benjamin Palmer and colleagues visualized the scallops’ eyes. 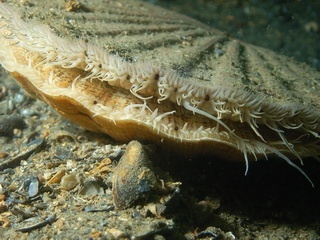 With many bright blue eyes along the edge of their mantles, scallops scan their environment continuously. The eyes are peculiar. They do not use a lens to form an image of the outside world, like almost all other eyes do (including ours), but a concave mirror; the eyes are similar to reflecting telescopes. As a second oddness, each eye contains not one retina, but two.

Using various microscopic imaging techniques, Benjamin Palmer and colleagues took a detailed look at the eyes of the great scallop, Pecten maximus, an inhabitant of the Atlantic Ocean which is appreciated in the kitchen. It has about two hundred eyes, each about one millimetre in size.

At the back, the eyes appear to be ’tiled’ with a mosaic of thin, square guanine plates, that are neatly placed next to each other. There are twenty to thirty layers of tiles, and the system reflects almost all incoming light: it is a highly reflective mirror. The fact that the crystals are thin square plates is prove that the scallops have strong control over the crystallisation process, because guanine crystals would take a different form when growing in the lab.

Guanine is also known as the nucleobase G, one of the four letters of the genetic material, the DNA; but it has quite a different application here.

On the outside of the retinas, the eyes also have a lens, but this lens is weakly refracting and it hardly contributes to the imaging.

Thanks to the many eyes, a scallop can see if a predator is approaching. In case of danger, it makes sure to get away: scallops can move by opening and closing their valves quickly. Though it is not quite like swimming, they can escape if they have to.

Watch a scallop moving in its habitat