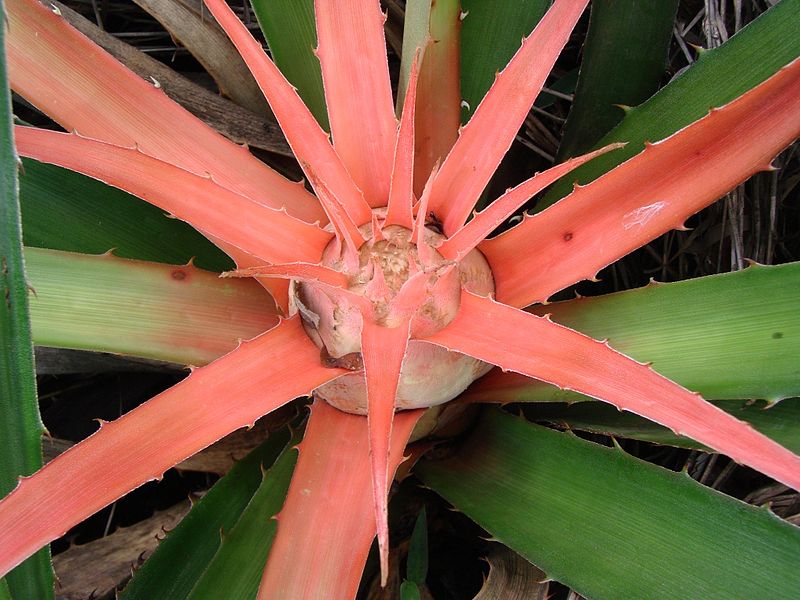 In case of a fire event on the Brazilian cerrado, many animals are killed. But the spider Psecas chapoda, which lives on a bromeliad plant, has a chance to survive, Paula de Omena and colleagues write. 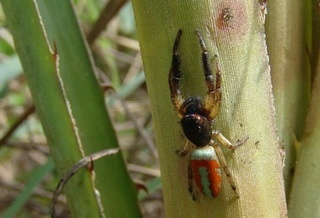 The terrestrial bromeliad plant Bromelia balansae and the spider Psecas chapoda are strongly associated with each other. The spider lives almost exclusively on this prickly plant, in the centre of which it is protected against its predators. On the leaves, adult spiders hunt, court and mate, females lay their eggs, and spiderlings grow up. Up to twenty spiders may inhabit one plant. Conversely, although the plant can do without Psecas chapoda, it benefits when it is inhabited by spiders, because it extracts nutrients from their faeces; the predatory spiders also protect the plant against herbivorous critters.

Now, Paula de Omena and colleagues discovered that this nice mutualism offers an additional benefit to the spider: it can survive a fire on the plant, because the leaves provide shelter and protection from the heat of the flames. Strikingly, the plant is known as ‘Heart of Flame’, as the centre turns bright red when it is about to bloom.

The bromeliads and spiders live in South America, including the Brazilian cerrado: a savanna-like area with trees and shrubs. In the dry period, which lasts about half a year, natural fires frequently rage. The researchers assumed that in the centre of the plants the spiders are sheltered from the heat of flames, and to find out whether they were right, they counted plants and spiders in a small and isolated cerrado fragment before and after a natural fire event.

The day after the fire, the number of spiders had strongly decreased, and also the percentage of bromeliads occupied by spiders was low. But in the centre of a number of plants with intact leaf structures, the researchers found spiders that had survived the fire, and thanks to their survival, the spider population recovered within five months.

Without this possibility to hide, far fewer spiders would survive a fire event and it would take much longer for the population to return to pre-fire levels. A new fire would probably break out before the population fully recovered – so that Psecas chapoda would run a risk to disappear completely. Thanks to the plants, this does not happen.