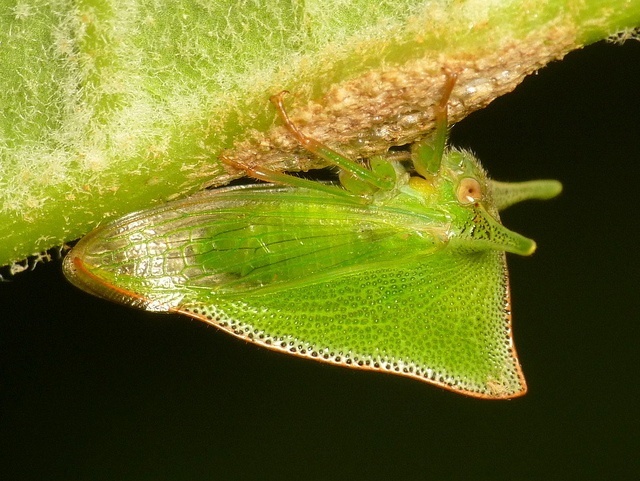 Females of the treehopper Alchisme grossa exhibit complex maternal care. If a mother has been separated from her offspring, she can localize and recognize them, as Daniel Torrico-Bazoberry and colleagues show.

The treehopper Alchisme grossa occurs in Central and South America, where it lives on a number of host plants, feeding on plant sap. The females lay their eggs on the host plants; they cut a slit in the midrib at the underside of a leaf, deposit the eggs in it and cover the egg mass with a frothy secretion.

They then will exhibit extensive brood care for a few months, Daniel Torrico-Bazoberry and colleagues write. The caring behaviour is unique for such a small creature. A female positions herself over the eggs and shields them with an enlarged pronotum (dorsal plate of the thorax) which bears two horns at the front side. If parasites or predators, such as spiders or predatory bugs, try to reach the eggs of a guarding mother, she will behave like a hero. She moves her body, fans her wings and kicks with strong legs to scare off the enemies. A batch of eggs is certainly lost without its mother; if it does not fall prey to enemies, it will desiccate.

The offspring rely on maternal care until they have completed development. The treehoppers undergo an incomplete metamorphosis. The nymphs that hatch from the eggs resemble adults, but are smaller. They undergo five instar stages before they are fully grown. Just like adult treehoppers, nymphs are sap feeders. Shortly before they hatch, the mother cuts a number of small holes in the midrib near the batch of eggs, so that the tiny nymphs can easily puncture the vein to tap the sap flow. And she stays with them. If the nymphs feel threatened, they drum on the leaf with their legs and the mother will come.

Now Torrico-Bazoberry shows that a female can localize and recognize her offspring after having been separated from them. This is useful, because often several females start a family on a single host plant, each on her own leaf. Torrico-Bazoberry put ten to fifteen nymphs from a single family on a host plant in the lab and a female on 20 centimetre distance on the same plant; in some cases she was the mother, in others she was not.

Separated from their mother, the nymphs often started to trample; one or a few began, the rest joined in producing a wave-like synchronized behaviour. Upon this rocking behaviour, the nymphs gathered. If the female that was put on the plant was their mother, they aggregated more closely; apparently they detected her presence. The female responded to the rocking behaviour if she was the mother: each mother approached the nymphs. Some non-mothers also did, but not all of them. 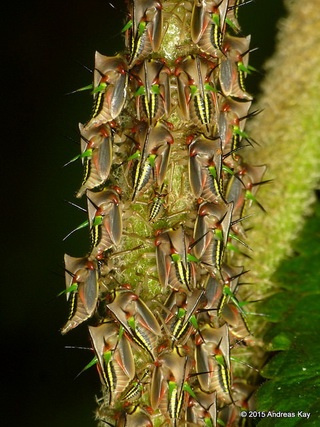 Apparently, mother and nymphs discriminate kin from non-kin, probably on the basis of the composition of the chemical compounds of the outer skin layer, the researchers suggest. Chemical analyses revealed that this composition differs between individuals, differences between nymphs of a single family being much smaller than differences between nymphs of different families. Because the nymphs aggregate more closely in presence of their mother, it is easier for her to defend them and prevent them from desiccation.

Sometimes, the nymphs stay on their natal leaf until reaching maturity, but sometimes they disperse over the plant stem before that time. The mothers follow their young and together they form mixed aggregations with nymphs of other families and their mothers.