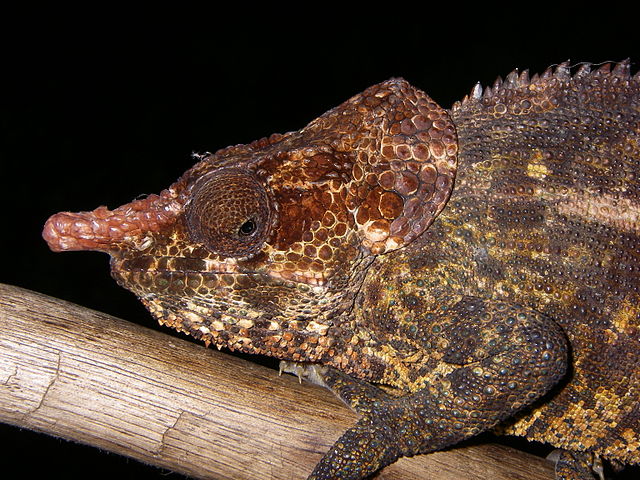 Many chameleon species are discovered to possess bony bumps that emit blue light through the skin. The glowing bumps enable the animals to recognize conspecifics and males probably show them off to females. We don’t perceive them in natural light, but the animals do, David Prötzel and colleagues think.

There are many ways in which an animal can make itself stand out, for instance with scent, colour, song, dance, decorative feathers or eyes on stalks. But here is a new one: chameleons appear to have small bumps on their skull that emit blue light, David Prötzel and colleagues report. 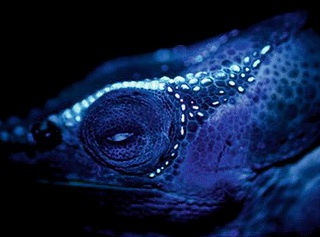 That may sound like horror, but there is nothing ghostly about it. Bone tissue is fluorescent: if it is hit by ultraviolet light, it is excited and will emit blue light. Chameleons use this natural phenomenon. The bumps, or tubercles, on their skull protrude through most of the skin and are covered only by a thin, transparent layer of cells, which is like a window. If ultraviolet passes that window and falls on the tubercles, they will glow blue.

Normally we don’t see it, as the amount of ultraviolet (UV) in natural light is too small. Therefore, the phenomenon was only discovered when the researchers illuminated heads of chameleons with a UV lamp. But natural light does contain enough ultraviolet to make the glowing bumps visible to the chameleons themselves, the researchers suspect, as their eyes are more sensitive to blue light than ours. Many chameleon species in Madagascar and in Africa have such glowing bumps, especially species that inhabit humid forests, where the component of ambient UV light is relatively high; the emitted blue light contrasts well with the dark background.

The pattern of bony bumps is species specific; most bumps are seen around and behind the eyes, but some species have such blue glowing tubercles not only on the skull, but on the entire body. Chameleons will recognize their conspecifics by the distinctive pattern of tubercles, which is a stable signal for these animals with their colour changing behaviour.

As in the nearly all species males posses on average more tubercles than females, the researchers assume that males display them to seduce a female.

So, chameleons possess glowing bone bumps as ornamentations used for recognition and display; it is possible that other lizards and snakes will be discovered to show fluorescencent bony bumps.

On this YouTube video, the researchers illuminate Furcifer pardalis and two Brookesia species to elicit the blue glow. And on this video you see the knobby skull of Calumma globifer.