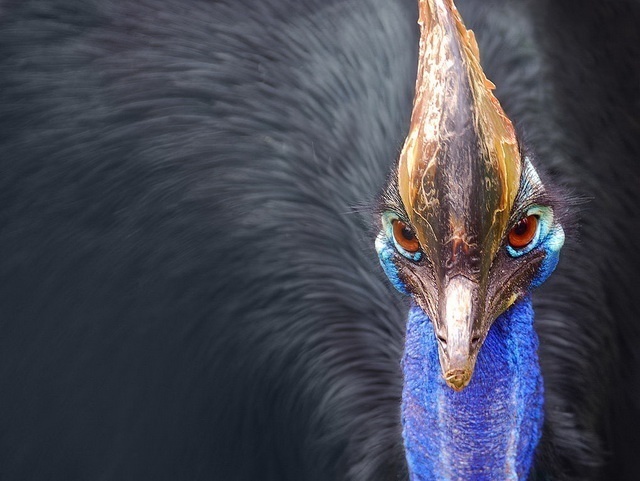 How can the tropical southern cassowary stay cool at high temperatures? Danielle Eastick and colleagues show that it uses its helmet to prevent overheating.

Just because of its size and strong legs – with a dangerous dagger-like claw that can be 10 centimetres long – the southern cassowary is an impressive bird. It also wears a prominent helmet or casque. What could be its function?

Until now, that was a mystery. Perhaps the helmet amplifies the deep sounds that the bird can produce, some people thought. Or perhaps it is a decoration to seek the attention of possible partners, next to the blue head and the blue and red wattled neck, according to another assumption. Otherwise, it may protect the head when the bird is moving through dense vegetation at high speed, or involved in a fight.

But now, Danielle Eastick and colleagues come up with a different answer.

The southern cassowary lives in tropical forests of New Guinea and Australia. Being a large and dark animal, it can easily become overheated at high temperatures, so it must have the possibility to offload heat. Eastick hypothesized that the helmet might offer that possibility and set out to test this idea. It turned out that she was right.

The helmet consists of fragile, spongy bone and is partly hollow; it is covered with a horn layer and has an extensive superficial network of blood vessels. Infrared images taken by a special camera revealed that the blood vessels dilate at high temperatures, and the helmet gets warm. Heat can be offloaded to the air. But when it is cold, the blood vessel walls constrict and only a small amount of blood flows into the helmet. It cools down while the heat of the animal is preserved.

The legs and the tip of the beak contribute to temperature regulation in the same way, but the helmet plays the most important role. When it is very hot, a cassowary sometimes plunges its head into the water to lose more heat.

The possibility of thermoregulation had already been suggested earlier, but it was never studied extensively. There are some other tropical birds with a helmet that may help to offload heat; for instance, some hornbills have a helmet on the beak. And perhaps the helmet of some dinosaur species facilitated heat loss as well.

The fact that the helmet of the cassowary has a function for thermoregulation does not exclude that it also plays a role in partner choice. Although, to be honest, its design is not very impressive.