Sperm to both male and female partners 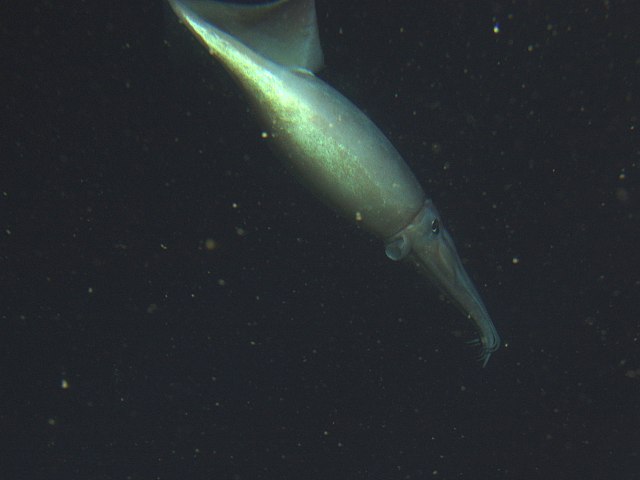 Males of the humboldt squid are generous with their sperm cells; male-to-male mating is as common as male-to-female mating, Henk-Jan Hoving and colleagues discovered.

The mating of the humboldt squid or jumbo squid, Dosidicus gigas, is peculiar. Males produce spermatophores, long narrow capsules in which sperm cells are packed, and deposit them around a partner’s beak, which is between the eight arms and two tentacles. Each spermatophore then turns itself inside out to form a so-called spermatangium, which attaches itself to the skin.

If the partner is a female, the sperm cells will be needed. When she is spawning, she will use the sperm cells to fertilize the eggs. But the males transfer their sperm packets not only to females, but also to other males, according to Henk-Jan Hoving and colleagues. And males can’t use them.

It is not possible for researchers to directly observe the mating behaviour of the squid, which occurs in the eastern Pacific Ocean, because the animals live at a depth of several hundred meters. Instead, in order to learn something about that behaviour, the team examined the buccal area of captive specimens, both males and females, and counted the implanted spermatangia. They found sperm packets attached to both females’ and males’ buccal tissues, the same number in both sexes. The motto of mating males seems to be: ‘deposit your spermatophores anywhere you can’.

The question is why they don’t distinguish between male and female partners, as sperm cells transferred to a male are wasted.

The authors offer an explanation. The animals live in large mixed schools, in which they encounter many females and males. External morphological differences between the sexes are small, and a male that is about to mate has little time to check whether the individual in front of him is female. If he doesn’t manage to deliver his spermatophores quickly between the other squid’s arms and tentacles, he is in danger to be attacked. The humboldt squid is a predator; the suckers on its tentacles are lined with sharp teeth and its mouth has sharp edges. Cannibalism occurs.

That is why a male prefers a partner that is not larger, but of similar size. Because males are on average smaller than females, he will often deposit his spermatophores on a female that is not yet sexually mature. That is okay; she will store it until she needs it. But there is a chance that he accidentally transfers his sperm to a male.

Because of this strategy – be fast and stay safe – a humboldt squid male admittedly will waste sperm. But that is not a serious drawback. A male has hundreds of spermatophores available, and no more than 80 are transferred per mating. Even if he often mistakenly chooses a same-sex partner, he can still mate many females.

A female has dozens of sperm-storage organs in the buccal membrane, the seminal receptacles. Sperm cells leave the spermatangium after mating and migrate over the female skin to those storage organs, which apparently secrete an attractant.

When spawning, a female releases millions of eggs, held together in a gelatinous spherical mass. When that mass of eggs passes her mouth, the sperm cells will leave the storage organs, swim to the egg mass and fertilize the eggs.