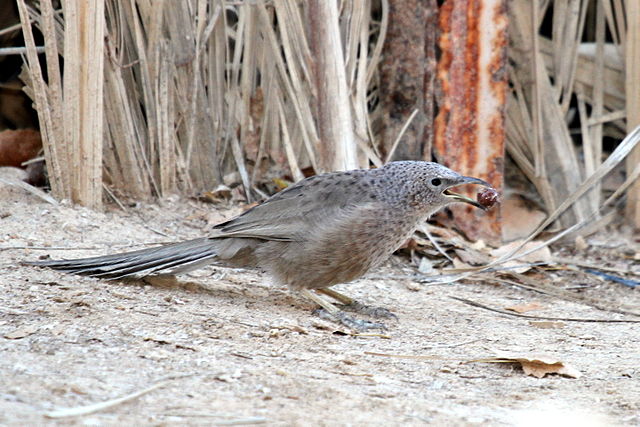 Unlike other animals, the Arabian babbler keeps its sex life private. It has a subtle way to invite another bird for a concealed copulation, as Yitzchak Ben Mocha and colleagues observed.

Animals do not seek to conceal their sexual behaviour. But the Arabian babbler, Argya squamiceps, is an exception. The birds, which live in stable kin groups of two to twenty individuals, do not want to be detected when copulating. A couple that is going to mate will take care to be out of sight of their group mates: at a certain distance or behind thick vegetation.

Yitzchak Ben Mocha and colleagues describe how the birds take a partner to such hidden place without revealing their intention to the other birds.

Arabian babblers live in open, dry landscapes across the Arabian Peninsula and Israel, where each group defends a territory. Within a group, only one pair, the dominant pair, will breed. They are the parents of nearly all young in the group. The other adult group members are subordinates and help raise the young. After hatching, the young stay in the nest for two weeks. And after fledging, it takes another eight weeks until they reach independency. During this period, they need care: protection and food.

Observing a population, the researchers witnessed that the birds have a subtle way to invite another bird to copulate. They place themselves in a location that is visible to that specific bird only while holding an object in the beak; often they slightly shake their head. The object can be anything, such as a twig, leaf, fruit, small animal or eggshell. The signalling behaviour is unobtrusive, but the partner grasps the message. When he or she accepts the invitation and approaches, the initiator moves away or hides behind the vegetation and the partner will follow. If they lose contact, the initiator comes back, places itself within the other’s visual field and repeats the invitation.

Usually, a copulation follows. But when another group member appears, the  signaller drops the object and stops the mating behaviour.

The object presented is nothing special, just something that happens to be abundant. So, it is not intended to impress. Neither is it a gift; although it may be edible, that does not affect the partner’s response. The presentation is just a subtle way to invite a mate for a concealed copulation.

Even dominant birds, which don’t have to fear that subordinates will dare to disturb a copulation, take great care to hide their mating behaviour. Why is that? The authors offer an explanation. The care of subordinate group members is crucial for raising the offspring. Without that care, the young have a smaller chance to reach adulthood. Moreover, they gain less weight and will be less capable to acquire food once they are independent.

The dominant pair does not want to lose that precious help. With overt mating behaviour, the researchers suggest, they would cause social tension in the group and increase the chance that subordinates leave or fight, which would be undesirable. So, the parents prefer to keep peace by keeping their love life private.