Young aphids die when closing a hole in their nest 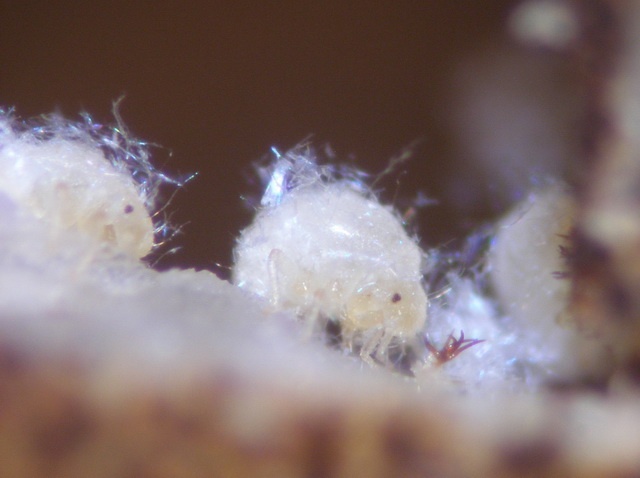 Japanese aphids, Nipponaphis monzeni, inhabit galls on hazel. A hole in the gall wall would mean the end of the colony living there, were it not for aphid soldiers that give their lives to close it. Mayako Kutsukake and colleagues show how.

The Japanese aphid Nipponaphis monzeni is a social species, living in colonies. Juveniles, called nymphs, serve as soldiers for a period before they become adults and reproduce. It is their task to defend the nest, which is located in galls on the branches of evergreen witch hazel (Distylium racemosum), and to repair it in case of damage.

To close a hole, they show a spectacular and unique behaviour. In a self-destructive action, they discharge their body fluid to plug the gap. The liquid solidifies, forming a scab. Mayako Kutsukake and colleagues were curious about the mechanism.

Colonies of Nipponaphis monzeni are founded by females that reproduce parthenogenetically. A colony of sisters is formed that are genetically identical and produce identical daughters. 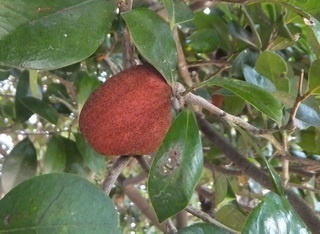 The aphids induce the hazel on which they live to form a closed, hollow tumour, a gall. The animals inhabit this gall, sucking plant sap from the inner wall; in this phase, they are wingless. The gall remains small for a long time, but after three to five years it begins to grow rapidly during spring months and the following summer, it is fully grown – up to eight centimetres long – and home to thousands of aphids.

Winged aphids then appear in autumn. They make an opening in the wall and fly away to a second host tree, an oak, where they mate and produce a new generation of colony foundresses.

A full-grown gall has a lignified, hard wall, offering safety. But during growth, the wall consists of soft plant tissue and the nest is vulnerable. Moth caterpillars consuming hazel tree leaves easily tunnel into such gall, ingesting aphids as well. The soldiers will not tolerate this and attack the enemy: they climb onto it and sting it to death with their mouth parts.

But the hole that the caterpillar gnawed in the gall wall still remains. It has to be closed, otherwise enemies or pathogens may invade, or the nest may desiccate.

Japanese researchers had already shown how the soldier nymphs repair the hole with a self-sacrificing behaviour. Dozens or hundreds of them gather around the hole and eject large amounts of white body fluid (hemolymph, which is comparable to our blood) through two tubes on the abdomen. They mix the secretion with their legs and skilfully plaster it over the hole. Some soldiers are buried, others are locked out in the process. And all shrivel after losing their body fluid and will die.

Any way, the hole is fixed; the plug hardens and turns black. As a result, the colony is likely to survive the damage. After the sealing, the gall wall is healed, as the soldiers trigger the tree to cover the plasterwork on the inside by regenerating plant tissue.

Now, Kutsukake investigated the substances with which the soldiers repair a hole. The body fluid, she shows, contains many peculiar large cells of a hitherto unknown type that are packed with fat droplets and the enzyme phenoloxidase; the fluid contains long proteins and tyrosine, an amino acid.

When the soldiers discharge their body fluid, the cells rupture and the fat globules are released; the soldiers plug the gap immediately with a soft lipidic clot. At the same time, the other components come into contact with each other, and a coagulation process starts in which the proteins are linked to form a network that reinforces the lipid plug so that it becomes a scab.

The researchers assume that the process is derived from the process by which wounds heal. But in soldier nymphs’ hemolymph, the components are accumulated in extremely large quantities, far beyond what is necessary for wound healing.

With their unique repair behaviour, the soldier nymphs of Nipponaphis monzeni exhibit extreme altruism to defend the colony: they give their lives. Thanks to this sacrifice, a large part of their family survives. Otherwise the entire colony would have been lost.

On YouTube, the researchers show how soldiers fix a hole in the gall wall