Tendrils curl away from herbivore-infested plants 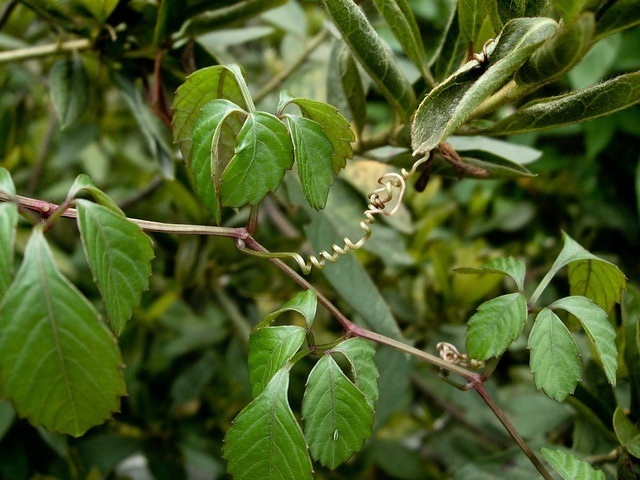 When the Asian climbing plant Cayratia japonica stretches its tendrils to other plants, it is careful. The tendrils withdraw as soon as they detect the presence of spider mite, as Tomoya Nakai & Shuichi Yano observed.

The Asian vine Cayratia japonica is an excellent climber: in America, where it was introduced, it is known as bushkiller. Tendrils of the plant coil around stems of neighboring plants, enabling the vine to grow towards the light. The tendrils grab onto everything they can.

Well, not everything really. The tendrils withdraw when they touch upon a plant that is infested with two-spotted spider mite, Tomoya Nakai & Shuichi Yano show. Two-spotted spider mite or red spider mite (Tetranychus urticae) is a small arachnid hat sucks up plant sap from leaves, which often don’t survive it. The mites occur on hundreds of plant species. If their number at some place is too high, they will walk to another place. As they follow each other’s trails, a group will soon aggregate at this new site.

Because of its physical contact with other plants, a vine could easily get infested by these harmful critters. But Cayratia japonica appears to have an effective way to prevent mites from invading. As soon as a tendril touches a plant that is occupied by mites, it withdraws and curls away from the infested plant. The researchers could show this in the lab, by placing a number of vines each next to a bean plant that was either clean or bearing many mites. They filmed the movement of the vine’s tendrils using time-lapse photography, making one film frame per minute.

The next question was: what cue does a tendril use to detect the presence of spider mite? Does it pick up the volatile compounds that a bean plant releases into the air when infested? Or does it feel the web with which the mites cover the plant surface to be safe underneath from predators?

Experiments showed that the volatile compounds released by infested bean plants have no effect on the stretching tendrils. But mite silk does: after contact with a spider mite web, the tendrils immediately withdraw. Nakai and Yano also tried spider silk, but the tendrils did not respond to it. The vine thus responds directly and specifically to the presence of spider mite.

This reduces the chance that mites disperse in groups from support plants to the climbing plant. A few of them will cross over during the short contact, but they are not save without the web and will disappear.