Older mothers and their offspring benefit 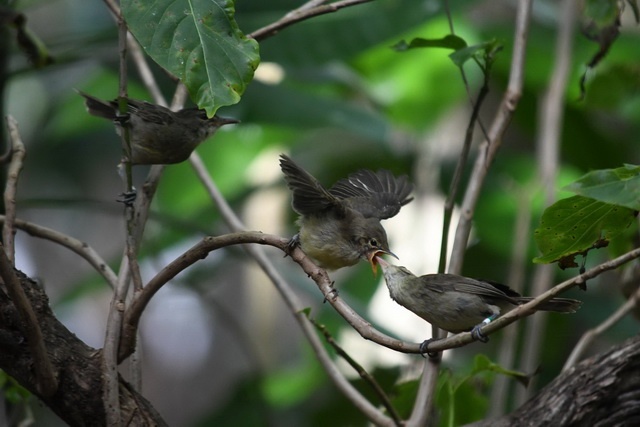 It requires great efforts of a female Seychelles warbler to raise a young. When she gets older, she is unable to sustain her work pace. The presence of helpers then compensates for the decline in care, as Martijn Hammers and colleagues show.

Adult Seychelles warblers often stay in the territory of their parents. Some of them, mostly females, make themselves useful by helping when the parents start brooding again. The helpers share in the reproductive success of their parents because new offspring is kin; they gain experience and may lay an egg in the nest themselves. But do the parents need their help?

When the female is older, they certainly do, according to long-term research by Martijn Hammers and colleagues on Cousin, an island that belongs to the Republic of Seychelles.

Seychelles warblers form breeding pairs. The female lays an egg once a year and both parents take care of the young. But the female does more. She incubates, and when the young bird has hatched, she brings it food at a higher rate than the male; the birds eat insects. The care continues for a long time, a young bird remains dependent on its parents for three to four months.

Young mothers are in good condition: although they work hard, they stay healthy. But as a female gets older – that is, from the age of 6 years on – her ability to provide care declines. She provisions her kid at a lower rate than when she was younger. Consequently, it has a smaller chance to survive the first, critical year. The elderly mother herself is ageing, and the chance that she will die increases sharply every year.

Unless she has female helpers.

Female helpers make life a lot easier for an elderly brooding female. She will provision her young less frequently. Thanks to the help, it will still get enough and the chance that it will survive is high. The presence of helpers thus compensates for the lower work paceof an elderly mother. She also benefits herself: senescence sets in later and proceeds more slowly, increasing the chance that she survives and can breed once again.

For a young mother, it does not make much difference whether female helpers assist: her chance to survive is very high anyway, and that of her young is quite good. And the nice thing is that older females, which really benefit from help, are more likely to have helpers in their territory. For they have breeded more often, and therefore have a greater chance that at least one young stayed with her and will assist.

And what about dad?

We are doing a Seychelles warbler male wrong by saying that he does not incubate and provisions less intensively. He has a different task: to protect the nest against egg predators. Anyway, his contribution does not decline as he gets older, as in females. Perhaps it is easy to sustain his early pace, which is lower than that of a young female.

The chances for a young to survive, therefore, do not depend on its father’s age. Also, males age later than females. Consequently: whether a breeding pair really benefits from help of helpers does not depend on the father’s age, but only on the age of the mother.

Seychelles warblers help each other also in another way