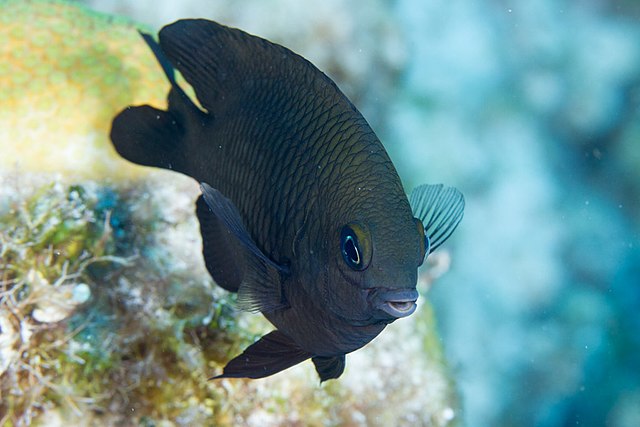 Every intruder is chased away from the algal farm of the longfin damselfish, but a swarm of opossum shrimp is allowed stay and even receives protection. For good reason, Rohan Brooker and colleagues report.

The longfin damselfish (Stegastes diencaeus) is an aggressive, territorial fish that lives on coral reefs. It grows its own food by creating a farm of a few square meters where palatable algae grow. It tends its algae and defends its territory fiercely; all animals are chased off.

Or rather: almost all animals. Rohan Brooker and colleagues show that during the day, a swarm of opossum shrimp (Mysidium integrum) can be found in many algal farms. A farmer not only tolerates the shrimp’s presence, but it also protects them from their predators, although it takes some extra effort. Apparently, the tiny animals are worth it.

Why would an algae-farming longfin damselfish care about the shrimp, Brooker wondered. Although the fish supplements its algae diet with some small animals, it does not eat these shrimp. Perhaps, Brooker supposed, the shrimp are fertilizing the algae with their feces.

And that turned out to be the case. A farm with a swarm of shrimp does better than a farm without such swarm, thanks to nutrients excreted bythe shrimp. It hosts more large brown algae that form a structure on which turf-algae, which the damselfish prefers to eat, grow well. This translates into a better condition of the fish: damselfish with a shrimp swarm on their farm have a larger energy reserve than colleagues with a non-fertilized farm.

Brookers conducted his research on coral reefs off the coast of Belize, Central America.

Thus, the farming fish benefits for its flourishing crop, the shrimp for its guarded refuge. There are no shrimp swarms to be found outside farms during daytime. The shrimp leave the farm at night, when it is safe, to filter food from the water at the surface. Then they return to their permanent residence.

The fidelity to this place is so strong that young shrimp remain in their parents’ farm. Therefore, the authors consider the relationship between longfin damselfish and opossum shrimp as an early stage of domestication. The fish ‘keep’ the shrimp as livestock.