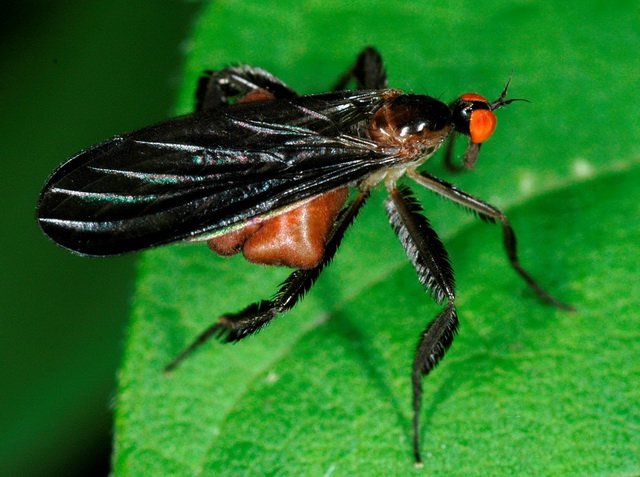 Females of the long-tailed dance fly (Rhamphomyia longicauda), which lives in North America, possess ornaments that make them attractive to males. They have sacs on either side of their abdomen and feathery black scales on their legs. By inflating the sacs and wrapping the legs along them while flying, they become laterally expanded. In this way, they show their quality, Jessica Browne and colleagues argue.

The reason is that females are unable to gather their food on their own. They need food to produce eggs, but cannot hunt for the smaller insects on which they live. That is why they have to to be provisioned by males. A male intending to mate brings a prey as a nuptial gift. Females mate frequently, because every mating yields a meal. But males have to catch prey first. That is hard for them, and a male that has gone to all that trouble will offer his gift only to a female that deserves it.

In order to seduce males, females gather in a lek. At dawn or dusk they form a swarm of dozens of flies in a clearing in the forest and ‘dance’ about half a meter above ground level. Males that have captured a prey will approach such swarm from below and see the females silhouetted against the dimly lit sky. Upon detection of an attractive female, a male will hover just below her. She doesn’t miss the chance and immediately drops on him. Together they leave the swarm to mate. She stores his sperm to fertilize eggs with later.

Males prefer large females. To be attractive, females inflate their sacs, lift their legs and wrap them along the laterally expanded sacs, so that their silhouette becomes much wider. They look like flying saucers. The wider a female is, the greater her chance of being chosen.

But what exactly does a large silhouette signify? Why is it beneficial for males to choose such inflated female?

The higher the quality of a long-tailed dance fly female is, the wider she can make herself, as Browne and colleagues show. A dance fly begins its life as a larva. After pupation, an adult fly emerges with dimensions that are fixed; also the size of the sacs and the scales on the legs of females is fixed. Probably, the size of an adult fly is an indication of quality and a result of how good conditions were during its larval stage. Now, it turns out that the larger a female is, the larger her expandable sacs and leg scales are in proportion. Because large females can make themselves relatively wider, the differences in quality that exist between females are magnified.

Their choice is a good one, because a wide female potentially produces many eggs. And because she is attractive, she will be chosen frequently and fed many meals, so she will be able to indeed develop those eggs. She also has a good chance of surviving long enough.

But a male that chooses an attractive female can only hope that he will sire some of that progeny. If he is the first to mate her, she will use his nuptial gift to initiate egg development, but by the time she is going to lay them, she has stored sperm from many more males and his chances are small. A male probably has the best chance to sire much offspring if he is the last to mate with her before she starts laying eggs, when they are almost mature.

But in what state of development the eggs of an attractive female are, a male cannot infer from her size. He must be choosy, but he must also be lucky.