European pied flycatcher may prefer to be a concubine 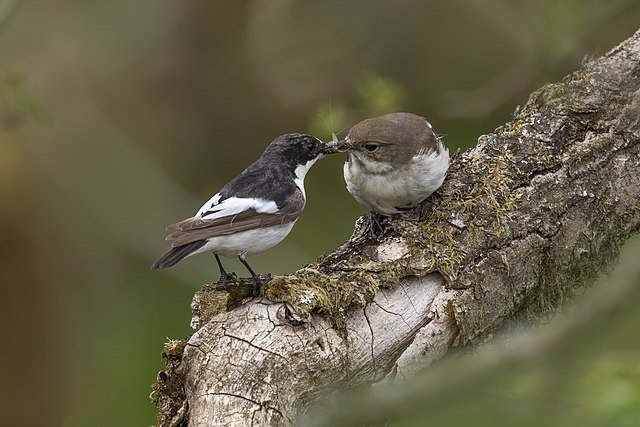 A high quality male is so desirable that a female pied flycatcher may be willing to become his secondary mate – as long as it is not too hard to take care of the young without his assistance, Simone Santoro and colleagues write.

Like most passerine birds, the European pied flycatcher (Fidecula hypoleuca) is mainly socially monogamous. But some males have a secondary female. This concubine gets little help from him when raising the young, but in good years, when food is abundant, that may not be a major problem, Simone Santoro and colleagues argue.

The males are the first to return from the wintering area in Africa, mid-April. They look for a suitable nest hole, which can be a tree cavity or nest box, and defend a small territory around it. Once a male occupies a good place, he tries to attract a female to breed with. Females visit a number of males before making their choice.

A couple is then busy for about five weeks. She lays five or six eggs and starts breeding when the clutch is complete. Both parents feed the young until they fledge, and dad defends the family. The breeding season covers the months of May and June; only one clutch can be raised in this period. But some males want more.

To get more, an ambitious male will have to occupy a second nest site and attract another mate. If successful, he will have to divide his paternal efforts over two nests. The research group, which works in Spain, had already shown how things go.

Males that succeed in starting a second nest are birds that have arrived and started breeding early, and that are able to defend two nests against rivals. These are strong males: of high genetic quality and in good condition. Such male stays with his first mate during the week that she is laying eggs. When she starts incubating, he tries to seduce to a second female. Usually, a second nest is located close to the first one.

When the young hatch in the first nest, he goes there to help feeding them. The primary female gets his full attention. Only when that first nest has fledged does he offer his services to the second nest.

So, the secondary female is worse off, as she has to feed the kids on her own for a while: that is hard work and she will see fewer young fledge. But, on the other hand, these young inherit a good genetic quality from their father. That is why a female may prefer to be the secondary mate of a high quality male rather than the only mate of a low quality male.

Particularly later in the season – when desirable single males are not available anymore -the choice to become a secondary female can turn out fairly well, because the time interval between father’s first and second brood will be larger and he will start helping on the second nest earlier.

Now, the researchers show that the availability of food also matters.

Because secondary females have to work harder than females in a monogamous relationship, their chance of survival is lower. (That is also true for primary females. Apparently, the situation is not ideal for them either, but it isn’t their choice.)

However, the lower survival rate of secondary females is an average over years; the researchers followed the birds for 26 seasons. The survival rate varies from one year to the next. In good years, a secondary female has less difficulty raising her young and her chance to survive is almost as high as that of a female in a monogamous relationship. To assess whether a year was good or bad, the researchers considerd the percentage of young that survived and fledged. A good year probably is a year in which food is abundant. In such year, a female can more easily accept a secondary position.

And sometimes. she does, as it turns out: in fat years it is more common for a male to have two families than in lean years. But even then, monogamous relationships remain the majority.