Begin/home » farming and gardening » Food supply according to demand 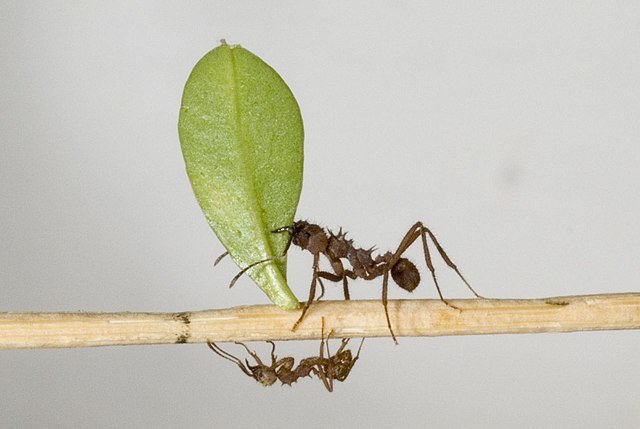 The fungus-breeding ant Acromyrmex ambiguus checks its crop and intervenes if it threatens to starve, Daniela Römer and colleagues show.

Leafcutter ants grow fungus on plant material in their underground nests with chambers. The ant workers cultivate their crop with care, according to research by Daniela Römer and colleagues on Acromyrmex ambiguus: if the fungus garden in one of the nest chambers deteriorates because of lack of food, they will bring it more pieces of fresh green leaves. 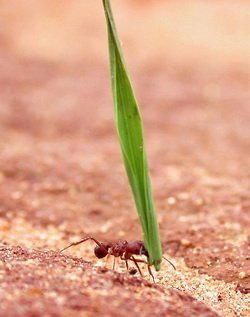 Ants are unable to digest plant leaves, but, thanks to their crop, fungus growing ants still are herbivorous. The fungus breaks down plant material and converts it into digestible, nutritious globules. The larvae are completely dependent on that food, the workers also eat it.

It was already known that leafcutter ants, which live in North, Central and South America, take excellent care of their crops. They have to, of course, because if the fungus dies, all their effort to grow it is wasted and the larvae have no food.

Acromyrmex ambiguus is such leaf cutter species; it lives in nests holding thousands of chambers in which fungus grows and brood is raised. Römer wanted to know how the workers distribute the leaf material they collect – i.e., food for the fungus – equally among those chambers.

The experiments she conducted once again show how skilled the small farmers are. The researchers have a colony of Acromyrmex ambiguus in the lab. It is housed in an artificial nest with a number of nest chambers that are filled with fungus, about thousand workers, and ant brood. For the experiments, they placed three of those nest chambers serially, each with its own access tube connected to a main corridor. Chambers with fresh leaf material and with water and honey for the workers were connected to one end of the main corridor. At the other end was a box to which the ants could bring waste. Video cameras recorded the workers’ behaviour.

In experiments in which the fungus in every nest chamber was in good condition, the workers distributed the pieces of leaf evenly among those three chambers: they delivered a similar amount to each one.

But in several trials, the researchers had starved the fungus in the center chamber by disconnecting it from chambers with pieces of leaf during two days before the experiment. The workers in that chamber had been unable to provide food for the fungus. As a result, the normal greyish-green top layer of the fungal mass had vanished.

In these experiments, the ants brought much more pieces of leaf to the center chamber than to the other two. They probably noticed that the fungus crop in this chamber was in bad condition and demanded more food because of the smell it emitted. So, they tried to save the dying fungus garden with extra care.

Workers of Acromyrmex ambiguus, and probably also those of other leafcutter ants, are farmers that monitor how their crop is doing. If its condition deteriorates, they react appropriately.