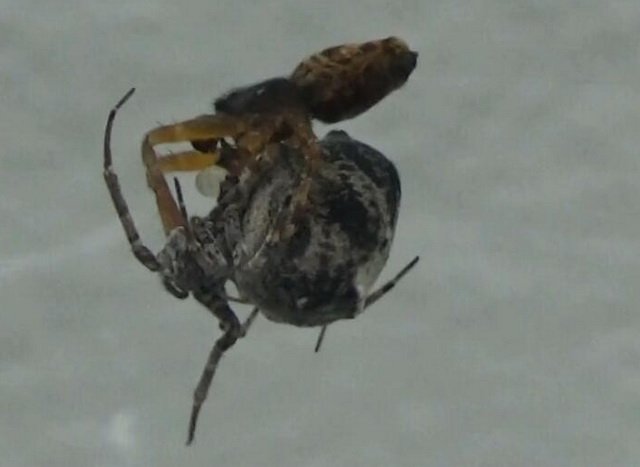 With a catapult mechanism, a male of the spider Philoponella prominens manages to escape his hungry partner after copulation. Shichang Zhang and colleagues recorded it on video.

For many male spiders, mating is life-threatening. Because to a female, a male not only is a supplier of sperm that she can use to fertilize her eggs, but also a tasty snack. And when he has given his sperm, he is just a meal. Dying without siring offspring is no option. So, he has to proceed with caution, and leave immediately after finishing copulation.

A Philoponella prominens male, a spider species from woods of central China, is very accomplished. After mating, he swiftly leaps away, out of her reach, Shichang Zhang and colleagues show. They recorded mating and leaping with a high-speed camera.

During mating, which lasts half a minute, he folds his two front legs against her, the researchers observed. By suddenly stretching them afterwards, he pushes off and shoots away. He had already secured himself before with a safety line of silk, which he had tied to the edge of her web. After leaping, he crawls back via that line to mate with her again. He is able to repeat the action up to six times.

Spiders move their legs not only with muscles, but also use hydraulics. They bend the legs by contracting flexor muscles but lack extensor muscles. Instead, they fill the joints with body fluid at high pressure, so that the legs stretch by released hydraulic power as the flexor muscles are relaxed. In this way, a male Philoponella prominens jumps from his partner. He reaches a speed of about seventy centimeters per second, spinning around at high speed. A female is unable to grasp him.

The leap is lifesaving, as the researchers showed. If they prevented a male from leaping with a fine brush, he was grabbed by his partner and eaten. As if he were just prey.

Another spider male that has to be careful: Maevia inclemens