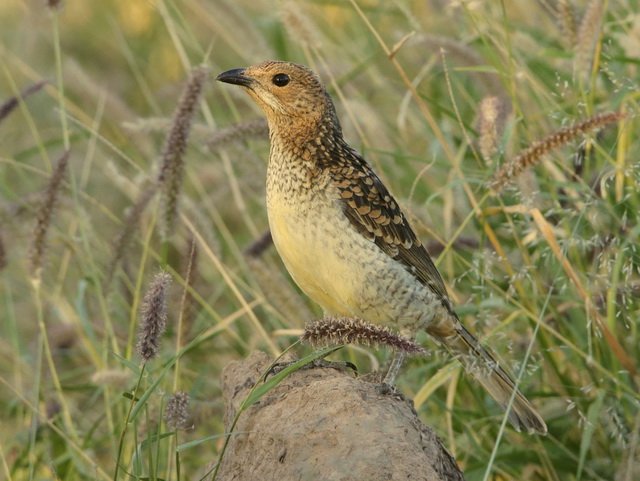 In company of a subordinate, a spotted bowerbird male stands stronger: his bower is safe, and more females are impressed, according to observations by Giovanni Spezie and Leonida Fusani.

Bowerbird males keep themselves to themselves. To seduce females, they each build their own bower with courtship platforms. They keep a far distance from each other; in the spotted bowerbird, the average distance is no less than 1 kilometre. Yet the owner of a bower often has company of a subordinate male. Giovanni Spezie and Leonida Fusani wondered what such male is doing there. Is he a younger male learning skills from an older one? Or does he actively participate in the activities, is it a form of collaboration?

The spotted bowerbird (Ptilonorhynchus maculatus or Chlamydera maculata) is one of 21 species of bowerbirds that exist, and it lives in eastern Australia. It has an erectile lilac crest on the nape. 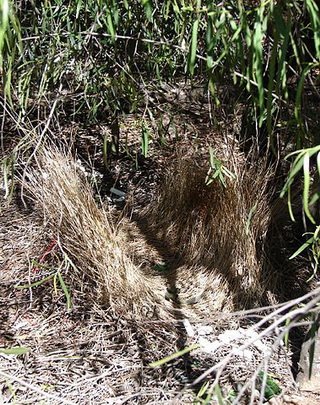 A male builds a lane of grass and twigs with a platform on both sides of mainly greyish objects, such as bones and stones. He decorates the place with berries, leaves and pieces of glass. Females will visit and enter the bower to watch the male calling and dancing next to his bower. The performance can last an hour. With his elaborate bower and energetic courtship display, he shows his quality. If she likes it, she will mate.

Males can devote all their time to show off, because taking care of the young is a females’ task. Some males attract several females, but all the effort of many others are in vain.

To find out what subordinate males are doing at bowers, the researchers made motion-activated video recordings. They analysed the footage to see if such male just watches, or also participates in bower maintenance and courtship. And if he helps, is he, like the bower owner, able to adapt his behaviour to the reaction of a visiting female, for example if she threatens to leave? Does the bower owner benefit from the help? And the helper himself?

Although subordinate males are less active than bower owners, they behave similar and respond to female behaviour in the same way (unless the researchers missed subtle differences). So, the relationship between an owner and subordinate seems unlike that of teacher and apprenticeship, the researchers suggest.

Rather, the subordinate seems to be a helper. In his presence, the bower is less likely to be plundered by competing males. Males often destroy each other’s bower or steal precious ornaments to embellish their own place. In the spotted bowerbird, marauding is less common than in other species, but the presence of an extra male even reduces the risk. That is why a bower owner may tolerate the presence of another male.

In addition, an owner with a helper has more courtship success.

The owner thus benefits from the company of a subordinate. In turn, the auxiliary male also benefits; sometimes he has an opportunity to mate with a visiting female. In addition, there is a chance that he will gain ownership of the bower. A partnership between males may last for years.

The collaboration would be most useful if the males were related, for example brothers, so that the subordinate indirectly has some reproductive success via the bower owner. But researchers have not yet investigated whether that is the case.

It is questionable. Other research had shown that males pay little attention to family relationships. They don’t necessarily place their bower near relatives, but they don’t avoid them either. And if they maraud a bower, it is the neighbour’s bower, regardless of whether the birds are relatives.