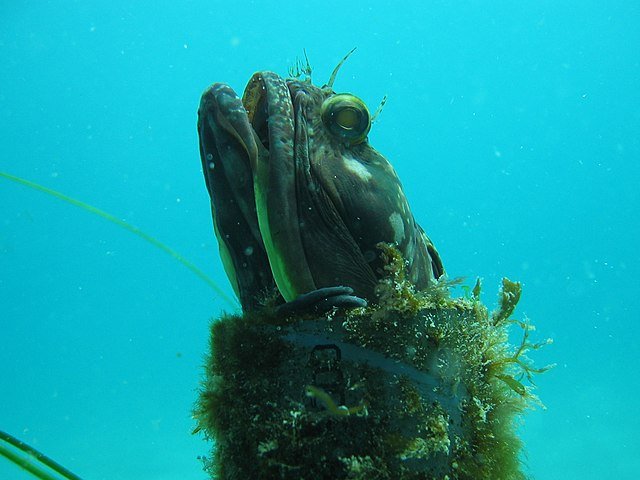 Males of the blenny Neoclinus blanchardi, the sarcastic fringehead, can open their mouths extraordinary wide. They perform their gaping display for nothing but impressing each other, Watcharapong Hongjamrassilp and colleagues show.

It is an amazing scene when Neoclinus blanchardi fully opens its mouth. A huge membrane becomes visible, consisting of palate and cheeks. It is vividly coloured and has a yellow margin.

In English, the fish is called sarcastic fringehead; it lives along the coast of California. It was already known that males, that have a larger mouth than females, impress each other with it. Now, Watcharapong Hongjamrassilp and colleagues show that they perform their elaborate display for that purpose exclusively.

The sarcastic fringehead can open a large mouth thanks to an upper jaw that is enlarged compared to related fish species and that grows longer than the rest of the body. Its posterior part is unossified and flexible and extends beyond the head. The jaw is connected to the skull in such a way that it can be rotated laterally.

As said, males signal by gaping to scare off each other. A successful male manages to occupy an empty snail shell or a rock crevice in which he hides with only his head protruding. He tries to attract a female. When she likes him, she will lay eggs in his shelter. He fertilizes the eggs and takes care of them until the young hatch. When another male invades his territory, he approaches him, performing the gape display.

The intruder either retreats immediately, or he persists and returns the display. Then the males clash and push each other with the open mouths pressed together. The bigger a male is, the wider his gape. The smallest usually loses, sometimes after the victor had bitten him.

Apparently, suitable shelters are so scarce that the fish has developed a special weapon to defend its place.

But the sarcastic fringehead’s exaggerated gape would also be impressive enough to scare away predators, Hongjamrassilp thought. Or enticing enough to seduce females. He scuba-dove into the water and conducted experiments in the laboratory to see whether this happens.

It did not. If a predator looms, the sarcastic fringehead chases it away by burst swimming. And when a female shows up, he rapidly shakes his head side to side to arouse her interest. He keeps his amazing mouth closed in both cases.

This video shows the gaping display