Queen larva is firmly attached to her ceiling 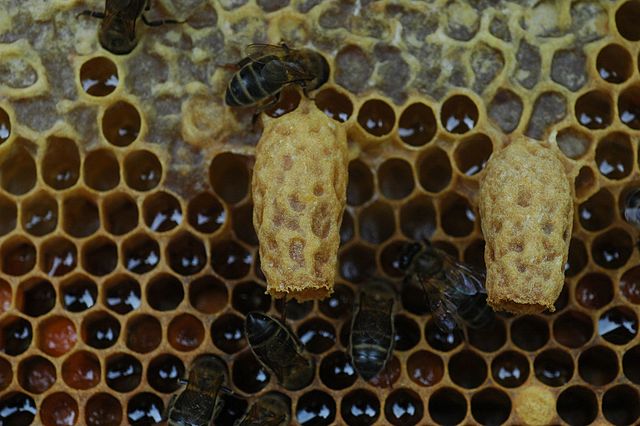 A bee larva that is to become a queen receives large quantities of royal jelly. And that is not only because the stuff is nutritious, as Anja Buttstedt and colleagues show.

A female honeybee larva can become a worker or a queen, her fate depending on the food she receives. During the first days, all larvae are treated to the so-called royal jelly, a nutritious mixture that the nurse bees produce in their head glands; it is rich in proteins, sugars and fats. After the third day, larvae that will grow up to be worker bees are raised on a different diet. When they pupate, nurse bees close their cells with a layer of wax. But a larva that is destined to become a queen is fed on royal jelly exclusively; the nurse bees bring it to her in generous quantities. Thanks to that nutritious diet, she grows bigger than worker bees.

The royal jelly has still another function, Anja Buttstedt and colleagues discovered: it holds the queen larva in place.

And that is badly needed. The cells in the comb, in which worker larvae grow up, are too small for a developing queen larva. For her, the bee workers will build a special cell, a so-called queen cell or queen cup. It is not only wider, but also differently oriented: vertically, opening downwards. Therefore, her royal highness could easily fall out of her cell.

Buttstedt shows why that does not happen: the royal jelly, which the workers deposit on the ceiling, is so sticky that it keeps the larva hanging from the ceiling until it pupates and the cell is sealed with wax. The stickiness arises because two proteins, royalactin (the main protein in royal jelly) and apisimin, form long fibrous structures that make the jelly viscous.

The workers produce and store the proteins in their hypopharyngeal glands. The gland mixture is liquid, enabling the bees to excrete it. But when they deposit it in a brood cell, they combine it with fatty acids which they produced in the mandibular glands, and in those acidic conditions, the proteins royalactin and apisimin form a fiber network.

So, royal jelly is a two-component adhesive, as the authors conclude, serving as excellent food as well. It is just what a queen larva needs to grow up safely.