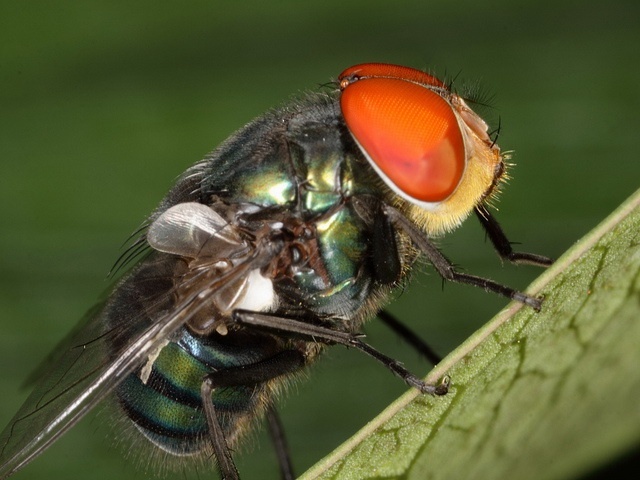 A blowfly often extrudes a liquid bubble between its mouth parts and then takes it back. By exhibiting this bubbling behaviour, it gets rid of excess heat, Guilherme Gomes and colleagues show.

How can a buzzing blowfly avoid getting overheated? Few people will ever have wondered, but as it happens, Guilherme Gomes and colleagues did. And they discovered that the oriental latrine blowfly Chrysomya megacephala manages to lower its body temperature by blowing a bubble.

At high air temperatures, a blowfly can expel a drop of liquid out of its oral cavity and hold it with its mouthparts. As some liquid evaporates, the droplet will rapidly cool down, whereupon the fly will take it in. The cycle is often repeated, and a droplet may tidally move out and back up to six times until eventually the fly swallows it and its body temperature decreases. The liquid is a complex mix of fluids derived from ingested meals and saliva.

The blowfly applies this trick during the day when ambient temperature exceeds 25 °C. At that temperature, the animal is warmed-up and busy, so that its muscles produce a lot of heat, which makes cooling necessary. When it gets really hot, above 30 °C, the fly becomes inactive and no longer generates heat. It then stops blowing bubbles.

At night, it bubbles more than during the day to stay cool, in order to decrease its metabolism and save energy.

If air humidity is high, the liquid will not evaporate well and a bubble will not cool down. If the fly still expels a drop, it will not re-ingest it, but spit it out instead.

Cooling down by extruding a droplet is only feasible in small animals, and a number of insect species seem to exhibit such behaviour. For larger animals, it is impossible to produce and handle a liquid drop that is large enough for a cooling effect. To us, it would make no sense to trying it – fortunately. We cool down by sweating, which is impossible to an insect because of its chitinous exoskeleton and wax covering.