Conflict between moult and care in Hooded Warbler 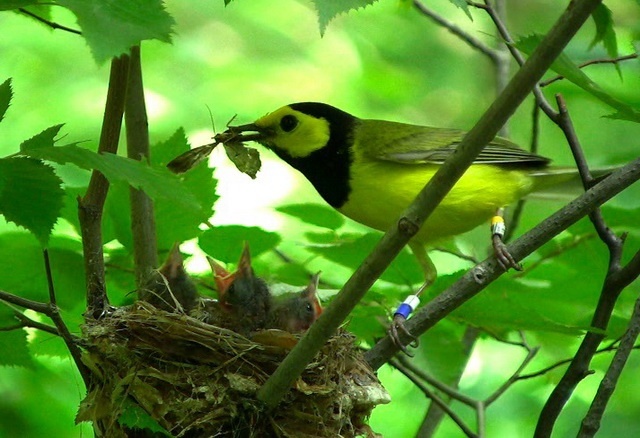 When parental care and feather replacement overlap in time, a Hooded Warbler male may abandon his family, forcing his mate to provide all remaining care for the young. The mother can handle it, as Ronald Mumme points out.

Migratory birds are under time pressure during the breeding season. Not only do they have to raise young, they also have to replace their feathers and store fat reserves to prepare for fall migration to their wintering area. Those tasks – caring, moulting and storing fat – may be in conflict.

The Hooded Warbler, which spends the summer in North America, has a very hard time, Ronald Mumme notices. Couples produce two clutches per season. The female incubates the eggs and when the young have hatched, both parents will provision them. The parents have to perform this job for about four weeks, for only then the young are independent. Hooded Warblers feed on winged insects, especially flies and mosquitoes, which they pick from the air. Before the young of the second clutch reach independency, it may already be time for the parents to initiate moult.

The problem now is that Hooded Warblers use their tail as foraging tool. The outer tail feathers have white spots that become visible when a bird spreads the feathers and that stand out against the olive-green background. By flicking its tail, a bird flushes flying insects hidden in the vegetation and captures them in the air.

But during moult, those feathers are shed simultaneously and a bird has to spend a week without a tail. It then has difficulty capturing insects, while it needs extra food because the moult is energetically demanding. And so it may happen that one of the parents leaves the family because it cannot obtain sufficient food for itself and the chicks, especially if they are so young that they cannot catch any food for themselves. Mostly, the father deserts, because males initiate moult on average two weeks earlier than females. Young, inexperienced fathers are more likely to leave than older dads.

Why males initiate moult earlier than females is not known yet.

When the father deserts at the end of the season, the mother is left responsible for all remaining parental care. But apparently, she has no big problems: the chance that such a female survives the winter does not seem to decrease; the birds spend wintertime along the Caribbean coast of Central America. And in the next breeding season, she probably will choose the same mate, even though he had left her.