Young false cleanerfish relies on disguise to bite other fishes 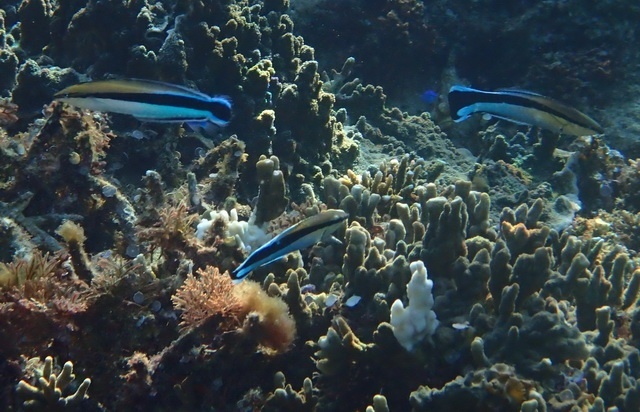 It is beneficial to look like cleanerfish, Misaki Fujisawa and colleagues show. By mimicking cleanerfish, false cleanerfish prevent attack by predatory fish. Also, they can approach other fishes and take a bite – but only small individuals show such behaviour.

Misaki Fujisawa and colleagues wondered why it resembles the bluestreak cleaner wrasse. The disguise, or mimicry, helps to escape from predatory fish, which don’t consume useful cleaner fish and don’t detect the deceit. So there is a protective function. But maybe the mimicry has a second benefit. False cleaners may be able to approach fishes undisturbed in order to attack them. In that case, the disguise would also enable aggressive behaviour.

To find out, the researchers observed the behaviour of the false cleaners in the coral reefs around Sesoko Island in Japan.

The false cleanerfish mainly feeds on benthic animals; it bites off pieces of the tentacles of tubeworms or soft parts of the boring clam. In addition, it bites the fins of other fishes and steals eggs from the nests of damselfish (Pomacentridae).

The resemblance to the bluestreak cleaner wrasse is profitable for fin biting, as it gives the false cleaner a chance to approach unsuspecting victims, even if it behaves a little differently. Whereas a cleaner wrasse invites clients for a cleaning service by performing a zigzag dance, a false cleaner does not: it usually approaches its victims from behind, makes a sudden dart and bites off a piece of the caudal fin. So, the disguise indeed seems to have a second function, next to the protection that it offers the false cleaners against predatory fish.

But only small individuals rely on their disguise to aggressively approach other fishes, as Fujisawa shows. As the false cleaners grow bigger, they continue feeding on benthic animals, but in addition to exploiting this main food source, they gradually switch from fin biting to egg predation. To raid nests, they often form small groups, and then the mimicry loses its effect, as cleanerfish always operate solitary or with their mate.

The false cleaners have good reason to change feeding tactics, as fish eggs are more nutritious than pieces of fin. But for small false cleaners it is difficult and risky to raid nests, because the eggs are guarded by damselfish parents, which will attack each enemy fiercely and without hesitation. Large false cleaners can elude attacks by swimming fast, but for small fish this is too dangerous. Biting fins is more feasible to them – thanks to their innocent appearance.