Lying in ambush on a flower, a crab spider will grab every visitor and eat it. Its victim may be a useful guest, such as a bee, as well as a harmful one. In buckler mustard, the presence of a crab spider turns out to be beneficial if flowers are infested by caterpillars, Anina Knauer and colleagues show.

Crab spiders have an effective way to acquire food. They reside in a flower, usually inconspicuously as their colour matches that of the flower, and wait for visitors to arrive. They grab them with the two pairs of large legs to which their name refers, kill them with a poisonous bite and eat them. They can handle prey that is much larger than they are. It is a disadvantage for a plant when such a spider settles on a flower, you would guess, for many flower visitors that they hunt are useful visitors, such as bees that pollinate the plant to enable it to set seed; it would be a disaster if those pollinators could not do their job.

But Anina Knauer and colleagues show that the presence of a crab spider can be a blessing. That is because a flower also gets visitors with bad intentions, and a resident crab spider can eliminate them. Therefore, they discovered, a flower will attract crab spiders in case of unwelcome visitors. 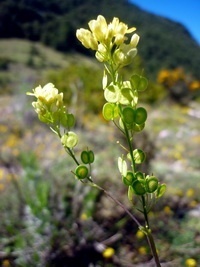 The researchers investigated how the presence of the crab spider Thomisus onustus affects the fitness of the plant it usually occurs on, buckler mustard (Biscutella laevigata), an alpine herb with yellow flowers and fruits that look like spectacles. The plant interacts with several insect species that are potential prey for the spider. The scent of the flowers attracts bees that take care for pollination in exchange for nectar. But the seed setting often fails because the flowers are consumed by caterpillars of the diamondback moth (Plutella xylostella). What happens when a crab spider is present?

In the field, the researchers also found, plants call the voracious spider for help when the flowers are infested. This call is chemical: infested flowers emit increased amounts of one of the scent compounds, beta-ocimene. The crab spider is attracted by that compound and will settle on such flowers. Indeed, a larger proportion of plants with caterpillars is occupied by a crab spider compared to plants without a spider. So, plant and spider have a mutualistic relationship: an infested plant asks for help and receives it, while the spider that comes to the rescue gets a meal.

But what about the bees, which are the most important pollinators? Aren’t they in danger when a spider is present? They hardly are, as it turns out. They usually detect the presence of a spider on a flower, despite its camouflage, and avoid a visit, and the spider almost exclusively feeds on caterpillars. Still, despite the reduced visit rates of bees, the flowers set seed. Apparently, there is no lack of pollen. The presence of the spider therefore turns out to be beneficial for plants that are infested by caterpillars.

High in the mountains Thomisus onustus does not occur, while buckler mustard does. Upon attack by caterpillars, plants of highland populations increase the amount of beta-ocimene to a much less extent than plants of lowland populations.