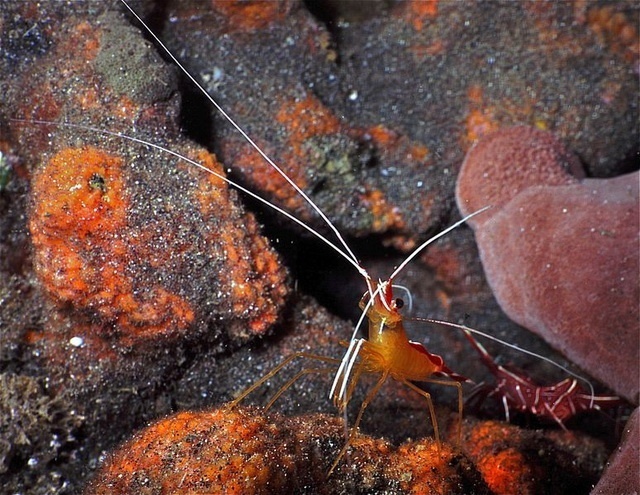 In case of injury, fish get extra benefits from the services of cleaner shrimp, David Vaughan and colleagues demonstrate. Even though the cleaner does not specifically clean the wound, its treatment aids healing.

Cleaner shrimp, just like cleaner fish, occupy cleaning stations for fish clients on coral reefs. With their mouthparts, they pick parasites and dead or damaged tissue from the skin of their clients, enjoying a morsel of food: a win-win situation. Such helper is the Pacific cleaner shrimp Lysmata amboinensis, which lives on coral reefs in the Pacific Ocean, Indian Ocean and Red Sea; in the film Finding Nemo, Jacques is representing this species.

How will this cleaner behave to a fish that sustains an injury, David Vaughan and colleagues wondered. Does it take advantage of an injured client by biting off some exposed living tissue? Or might his cleaning treatment be beneficial?

The researchers took cleaner shrimp into the lab, and also a number of sea goldies (Pseudanthias squamipinnis), a fish species that lives around coral reefs. They inflicted a small, superficial wound to one side of some fish, under anaesthesia; in the field, such wounds often occur. Half of the injured fish was then transferred individually to a tank where a cleaner was present for one hour each day; the remaining fish were housed in tanks without a cleaner. For control, uninjured fish were also placed in tanks with or without daily visits of a cleaner shrimp. The behaviour of fish and shrimp was observed, and healing of the wound was monitored.

A fish that wants its skin to be treated, will visit a cleaner shrimp and adopt an inviting attitude, presenting the side of the body it wants to be cleaned. Just after injury, it turns out, fish solicit cleaning less often. They keep the damaged side away from the shrimp.

But within 24 hours, the wound is closed. The spot turns red, indicating an inflammation; the redness increases during the first two days.

A wounded fish that has access to cleaner shrimp now wants to be cleaned at both sides. And after a few days, cleaning turns out to have health benefits: the redness of the wounded site decreases from the second day on, so inflammation subsides. After six days, a clear difference is seen between fish that were cleaned and fish that were not; in the latter fish, the redness has remained high. In other words: thanks to the activities of cleaner shrimp, a wound heals faster. There was no trace of abuse: the shrimp don’t aggravate an existing wound, nor do they cause any new damage.

Cleaner shrimp don’t focus cleaning specifically around the injury site, but treat an injured fish like they treat an uninjured one. The researchers think that the cleaning has an indirect positive effect, by keeping pathogens at bay that would otherwise invade the wound. Moreover, it is known that cleaner shrimp reduce stress in their clients. That will also help the healing process. So, by cleaning, cleaner shrimp also offer healing services.