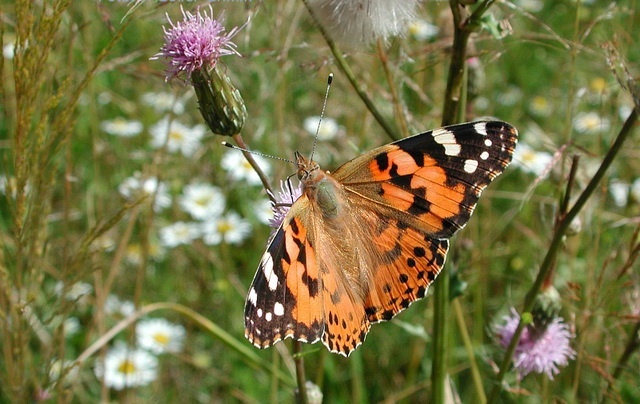 It was discovered two years ago that the painted lady butterfly migrates to the south in autumn and reaches the tropical savannahs of Africa. Now, Gerard Talavera and colleagues proved that their offspring returns back in spring.

Most European insects spend a resting period in winter. But the painted lady doesn’t. The butterflies, which can be found almost everywhere in Europe during summer, leave when autumn arrives. At high altitudes and benefiting from downwind, they fly over Europe, including mountain areas; they cross the Mediterranean and then the Sahara, enduring extremely low and high temperatures along their way. An individual painted lady can travel four thousand kilometres within a week: an incredible achievement for these fragile-looking creatures.

Eventually, they massively arrive in the savannahs of tropical Africa south of the Sahel, as Gerard Talavera and colleagues showed two years ago. In this area, the wet season is just about to end and the vegetation is exuberant. The butterflies lay eggs and the caterpillars feed on fresh green leaves. A new generation emerges while it is winter in Europe.

But it was unclear what happened to the descendants of the autumn migrants. After the start of the dry season, the savannahs dry out and the area rapidly becomes unsuitable for the painted lady. The butterflies disappear, but the question was: where do they go to? Perhaps the butterflies that moved into tropical Africa chose a dead-end path and go extinct. Perhaps they travel further south to find fresh green plants. Or maybe they cross the sand and the sea again to return to Europe, where they are seen in spring.

Talavera and colleagues suggested the latter possibility to be true. The painted lady population would undertake a migration flight two times a year to be able to exploit both the European summer and the green period south of the Sahara. Such a cycle would cover at least six successive butterfly generations. As yet, there was no proof that it really happened.

But now, the researchers have been able to demonstrate that painted lady butterflies indeed migrate northwards from the African savannahs in springtime. The chemical composition of the wings of a butterfly reveals where it grew up as a caterpillar. Painted ladies that are found in early spring around the Mediterranean did develop in tropical Africa, according to such chemical analysis. And they are on their way to the north.

The monarch butterflies have a distinct wing pattern, but with the same colours: mainly black and orange. For the monarchs it was found that the more black they have on the wings and the more intense their orange colour is, the greater is their flying ability. The same might be true for the painted lady: an intriguing question for further research.

A video made by the researchers: Vanessa’s Odyssey