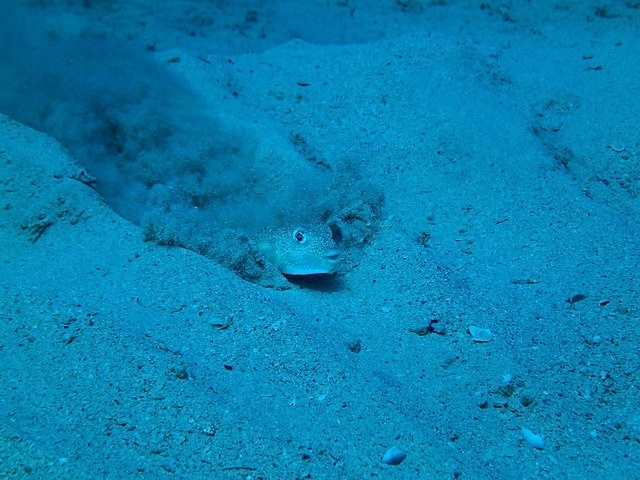 Thousands of times the white-spotted pufferfish male digs a rectilinear ditch in the sand, following simple rules. Ryo Mizuuchi and colleagues explain how this process results in a huge and beautiful sand structure. 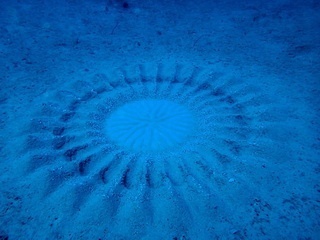 In 1995, divers detected a circular structure with a nice regular pattern on the sandy bottom of the subtropical sea around the southern islands of Japan; its diameter was no less than two meters. Shortly after, more of these structures were found. People were wonder-struck. How did these mystery circles emerge?

The answer was just as surprising as the find itself: the builder turned out to be the male of an unknown pufferfish, an inconspicuous animal only ten centimetres long. It was named Torquigener albomaculosus, white-spotted pufferfish. The large structure is its nest. It consists of an inner circle filled with fine sand particles, surrounded by an outer ring with 25 to 30 radially arranged ditches and ridges; half way, the ring is flattened and the ditches are a bit wider.

Hiroshi Kawase and colleagues described how the pufferfish creates this impressive structure, which takes seven to nine days to complete. First, it makes dozens of irregular depressions in the sand, probably to demarcate its building site. On the second day, a basic circular shape begins to emerge, with a flat inner circle and a vague pattern of ditches and ridges. The animal digs the ditches by swimming over the bottom and stirring up sand with its body and fins. The next few days, the inner circle grows and the pattern of ditches and ridges becomes increasingly clear. Moved by the fish’s bustle, the finest sand particles are deposited on the bottom of the ditches and then flow into the inner circle.

When a female shows up outside the ring, he invites her to enter the circle by stirring up a lot of fine sand particles. She likes that, because she prefers to lay her eggs on fine sand. When she is inside the nest, a game of approaching starts. He repeatedly rushes to her and retreats, she sometimes pretends to leave. Eventually she goes down to lay eggs, and while he bites her behind her mouth, he fertilises them with his sperm. They spawn repeatedly. Then she leaves, perhaps to come back again. On this day, the male will receive several females in his nest.

Then a new period starts: the care for the eggs is his task. He flaps his fins, keeps the eggs free from debris, and chases away fishes that come close to the nest. He now does not care about maintaining the structure anymore, so that the pattern fades and the gathered fine sand particles disperse. When the larvae are about to hatch after six days, he flaps his fins at a higher frequency. If the male starts a new breeding cycle, he will make a new nest instead of repairing the old one.

The question remains as to how this pufferfish is able to accurately construct a large structure with such geometric design. It mainly stays near the bottom and therefore it has no overview.

It doesn’t need to, as Ryo Mizuuchi and colleagues now show. The structure emerges because the fish repeats a simple behaviour – digging a ditch – thousands of times, applying a few simple rules.

The researchers derived those rules from their observations. They saw how the male marks the centre of the circle by pressing its belly on the ground. Then it repeatedly digs a rectilinear ditch. Initially, the ditches have a random orientation, but later they are more and more directed to the centre of the area. To dig the ditches in the ring, the male always swims from the outside to the inside. The pattern is becoming clearer because it always starts at a low position, where a ditch is already visible. It also digs in the inner circle, but mostly from the inside out; that is probably to demarcate the circle.

When the researchers simulated the building process on the computer following these rules, the ring structure with ditches and ridges did emerge. They also discovered that the thicker or stronger the male is, the wider its ditches are. It is possible that females assess ditch width to select a suitable male, next to the amount of sand he is stirring up. The research on this fish is not finished yet.