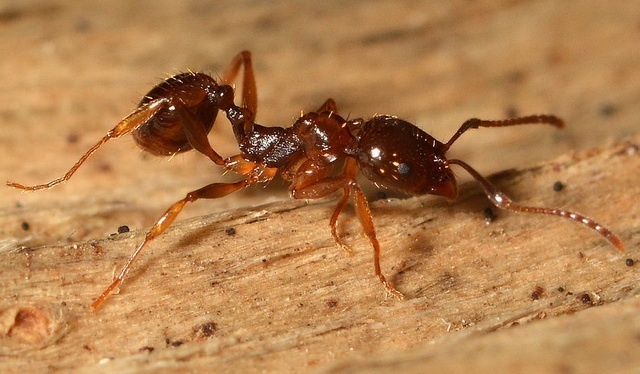 The ant Aphaenogaster subterranea uses absorbent material to carry fluid food back to its nest. It selects the most easily portable material, or it takes material that is discovered first, as Gábor Lörinczi and colleagues observed.

Ants of many species possess a greatly distensible crop and a highly modified proventriculus, in which they transport large volumes of liquid food back home for their nest mates. But other species, among which Aphaenogaster subterranea, don’t possess such internal carrier sac. Still, they are able to collect fluid food. They drop debris in such food source, and grasp the food-soaked material with their mandibles to take it with them. Their choice of carrier material is flexible, Gábor Lörinczi and colleagues write.

Aphaenogaster subterranea occurs in forests in Central and Southern Europe. It lives in colonies, mostly in a nest in the soil, under a stone. Specialised workers collect fluid food for the colony: fruit pulp and body fluids of dead arthropods.

If all piles of ‘carrier bags’ were close to the food bait (at a distance of 4 centimetres), the ants selected mainly small soil grains to transport to and drop into the food. These grains are most easily transportable.  If all piles were at greater distance  (12 centimetres), the ants were less selective. And if one type of material was close to the food bait while the other types were not, they used that material relatively more often. So, the choice of carrier material is not fixed. The ants prefer small soil grains, but if something else is discovered sooner or more readily accessible, they will use that, maximizing their efficiency.

Leave fragments were used only infrequently, even if it could be found close to the food bait. This material is difficult to handle.

Ants that retrieved food-soaked material from the food bait, mainly picked up small soil grains. From honey, they also collected many pieces of sponge. As the authors suggest, these may be easy to pick up because of their buoyancy. They also observed that after a while, the ants started to tear the pieces of sponge into smaller fragments before using them.

So, workers of Aphaenogaster subterranea show flexibility in foraging tool use, and they even modify some material, which is unique among insects as far as is known.