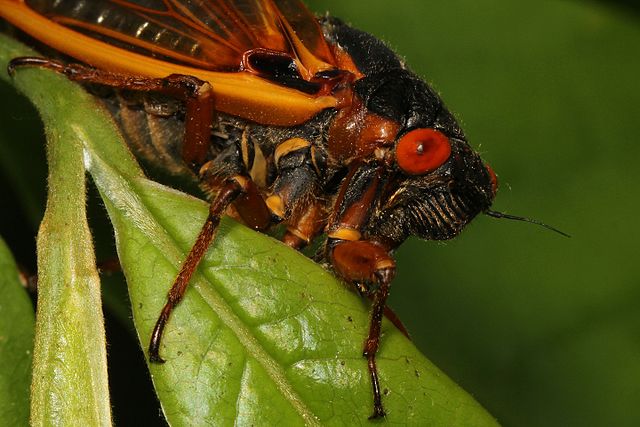 Massospora fungi produce substances that we know as recreational drugs, Greg Boyce and colleagues write. By doing so, they manipulate the behaviour of cicadas in which they proliferate. The insects face a horrible fate.

The fungus Massospora cicadina infects periodical cicadas of the genus Magicicada and manipulates the behaviour of infested insects in such a way that they will transmit the fungal spores to conspecifics. Horribly enough, they do so by sexual activities, while their rear part has already been largely destroyed and turned into a fungal mass. Greg Boyce and colleagues try to find out how the fungus exerts its dismal influence.

Magicicada species, which live in the east of North America, are almost never to be seen. They spend most of their life underground as nymphs, the immature form. Only once in many years – some species take thirteen years, other species take seventeen years – mature nymphs emerge from the soil, synchronously and massively per species and per area. They moult into mature cicadas that live only for four to six weeks. In this period, they mate and the females lay their eggs on tree branches. Young nymphs fall down and disappear in the soil.

This unusual life cycle makes it very difficult for natural enemies such as birds to specialize on adult cicadas, because they would not be able to find prey for many years while occasionally, once in thirteen or seventeen years, there is an overwhelming amount.

But the fungus Massospora cicadina can deal with the life cycle of these cicadas.

Fungal spores rest in the soil until nymphs emerge and then infect them. After moult, the fungus proliferates in the abdomen of adult insects. Eventually, their rear part, genitals included, falls off and a fungal spore mass becomes visible.

The heavily damaged cicadas try to mate, even more vigorously than normal. Of course, this is useless to them, but the fungus benefits: during the copulation attempts, the unfortunate cicadas transmit spores to conspecifics.

In these insects, the fungus forms a second infection stage. Because now time runs out for the adult cicadas, a third infection is not feasible. Therefore, instead of infective spores, the fungus produces resting spores, which fall down and wait in the soil until the next generation of cicadas appears.

Earlier this year, John Cooley and colleagues described deviant behaviour in males with a first stage infection. Normally, males sing in chorus to lure females. When a female shows interest in a male, she makes a flicking wing movement that is tuned to his song. He then utters more complex song, she answers with a tightly timed wing-flick, and a ‘duet’ is created while the two approach each other.

First stage infected males try to acquire a female mate in the normal way. But they also respond to the song of other males with female-like wing-flicks. As a result, not only females, but also males are attracted – and become infected. The fungal infection spreads extra fast.

Now, Greg Boyce shows how the fungus manages to affect the behaviour of the cicadas. Among the substances that it produces in the cicadas’ abdomen is cathinone. This is known as the active substance in khat, which is released when chewing leaves of the Khat plant, Catha edulis. It is surprising that a plant and a fungus share this substance. Cathinone is closely related to amphetamine, or speed, a stimulating drug, and just like the drug, it interferes with the communication between nerve cells. Apparently, this results in abnormal behaviour in male cicadas.

Another Massospora fungal species, which infects cicadas with an annual cycle (Platypedia species), also manipulates the sexual behaviour of its victims, Boyce and colleagues discovered. It produces psilocybin, a hallucinogenic substance known from certain mushrooms, most importantly Psilocybe species. Again a remarkable finding, as the fungus is not closely related to these mushroom species.