Home » warm, cold » A large bill to cool down

Tufted puffin may be overheated after flying 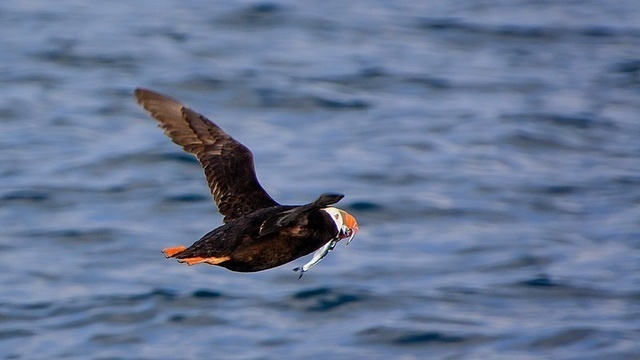 Flying is strenuous for a tufted puffin and it causes high heat production. After landing, the bird has to cool down. The bill is used to dissipate excess heat, Hannes Schraft and colleagues report.

Puffins get their food from sea. They have relatively short wings that enable them to dive and swim under water, looking for fish and other prey. But the wings are less suitable for flying. To stay airborne and move forward, the wings have to flap in high frequency; the breast muscles work hard and much heat is produced.

Outside the breeding season, puffins usually stay at sea. But when they have a young to raise, they have to travel regularly between nest and sea. When a puffin approaches the nest with a mouth full of fish to feed its young, it is often overheated. 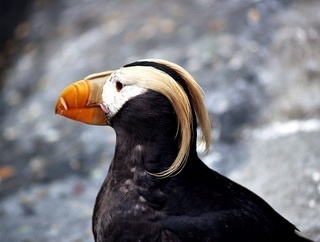 The birds have a strikingly large bill, which helps to get rid of excess heat during and after the flight, as Hannes Schraft and colleagues show. The object of their research was the tufted puffin, which breeds along the northern Pacific Ocean, for instance on the coasts of Alaska and Kamchatka and on the Kuril Islands.

With a special camera, the researchers made infrared images of birds that rested after landing; they did so from a distance of five to ten meters, in order not to disturb the animals. They took images of bill and back every two minutes. From these images, they were able to calculate temperature and heat exchange.

The temperature of the back remained constant, but the bill gradually cooled down; after half an hour its temperature had decreased by about 5°C. Also the heat exchange gradually decreased after landing, and the portion dissipated via the bill became smaller; a puffin also loses heat through legs and feet. Apparently, the bill is most important for cooling shortly after flight.

The bill dissipates heat thanks to an extensive network of blood vessels; warm blood cools down a bit when circulating through these vessels, just as in a cassowary’s helmet.

The tufted puffin bears the white-yellow tufts to which it owes its name only during the breeding season, when both males and females are decorated. A pair produces one young per year, and the tasks are divided: both mom and dad will breed and feed their young.

See how the cassowary manages to stay cool