Take no heavy load when traffic flow is high 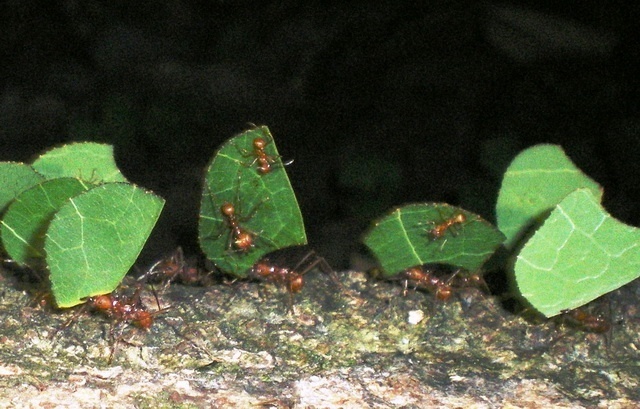 When the number of workers on foraging trails is high, leaf cutters maintain the flow by carrying only small pieces of leaf with them, Mariana Pereyra and Alejandro G. Farji-Brener show. Otherwise traffic jams would arise.

The fungus that leaf cutter ants grow in their gardens needs fresh plant material continuously to grow on. And so ant workers walk up and down trails that are cleared and maintained free of debris. They leave the nest to cut leaf fragments from plants and return with a piece in their jaws.

Sometimes ants carry extra-large leaf fragments, causing them to move slowly. That is cumbersome when the trail is crowded, because then a slow ant may hinder the flow. Accordingly, when many ants are walking on the path, they only take small loads with them, Mariana Pereyra and Alejandro Farji-Brener write.

In earlier research, Farji-Brener and colleagues had shown that workers of the leaf cutter Atta cephalotes sometimes carry a strikingly large piece of leaf, up to twice the normal size, to deliver a large gain at the nest. But such extra large burden also has disadvantages; a heavily loaded ant runs slower and hinders the ants that come behind her carrying a normal load. Their walking speed may be reduced by up to 50 per cent. So, a traffic congestion may form behind a heavily loaded worker; the researchers call it the truck-driver effect. It slows down the entire column.

A slow ant on the trail is especially obstructive when it is busy, because in that case, ants walk close together and cannot overtake a slow colleague. At high ant flows, the biologists observed relatively few ants with a heavy load. Is that because the ants are so ‘wise’ not to enter a busy path with a heavy load?

Pereyra and Farji-Brener now answered that question in another species, Acromyrmex crassispinus. They offered workers pieces of ‘leaf’: filter paper soaked in orange juice. They presented pieces of normal size and of extra large size and observed what choice the ants made when different numbers of ants were walking on the trail. And indeed: only at low ant flows, workers selected extra large pieces of paper; when many ants were running, they only picked up the smaller pieces.

Various reasons are thinkable for avoiding large pieces; they make it more difficult to manoeuvre in case of obstacles, the chance of collisions is greater and a heavily loaded ant is more vulnerable to predators. But the fact that ants tend to ignore the large parts at high ant flows suggests that they also do so in order not to obstruct traffic. In this way, leaf cutters optimize colony performance. All going at the same speed: on a busy path, that is the best way to keep a steady flow.