Dangerous bullet ant and defensive bee tolerate each other 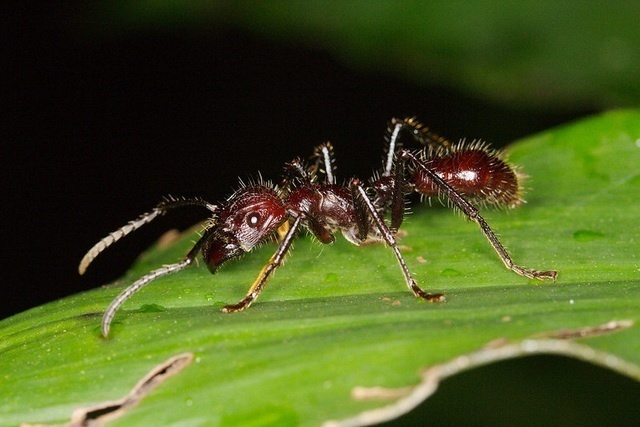 The bullet ant is not a friendly animal, the stingless bee defends its nest fanatically. Still, these two fighters live smoothly together, Adele Bordoni and colleagues report.

Just like honey bees, stingless bees are social insects. They construct their nest in a cavity, but are unable to dig out their own cavity. So, they exploit an existing one, and they often choose a bigger nest of other social insects, for instance termites. This offers a convenient home, because the host guarantees a proper nest climate.

The small stingless bee Partamona testacea, which occurs in the Amazon in South America, builds its nest in an ants’ nest. That may be the nest of harmless fungus growing leaf cutter ants, but they also inhabit nests of the bullet ant Paraponera clavata, as Adele Bordoni and colleagues report. A weird choice at first sight, because the bullet ant is not quite friendly.

The bullet ant will aggressively attack as soon as it feels threatened. Its sting is known to be one  of the most painful experiences you can have in nature. In addition, it hunts for insects, which it preys upon, and it has large jaws. If you also realise that the bee is much smaller, you would expect it to avoid the nest of bullet ants. But instead, it enters it to make a home.

And things are going well, Bordoni shows. In the lab, the researchers placed a bullet ant and a bee together in a petri dish. The fierce ant behaved only a little aggressively and did not attack the bee. If the bee was from a nest within the ant’s nest, the ant was even less aggressive. Biting and stinging were highly uncommon.

Conversely, stingless bees also are tolerant. They defend their colony fanatically, as the researchers observed at an ants’ nest with inhabiting bee colony; the bullet ant builds its nest at the base of a tree. When they introduced an ant at the bees’ nest entrance, bee workers grabbed that ant, dragged it deeper inside the nest and covered it with resin, so that it was not able to move anymore.

But a bullet ant will not enter a bees’ nest voluntarily. An ant may pass the entrance, where always bee guards are present to deter invaders. And then the bees will not attack. When a bullet ant passes by, the guards were seen to retreat and to reposition when the ant was gone. When the ant passing by and the bee are from different ants’ nests, the bee guards reposition faster; in that case, they are a bit more vigilant.

Apparently, the dangerous bullet ant and the defensive stingless bee Partamona testacea recognize each other as familiar species, and they also discern individuals of an associated nest from foreigners. They probably know each other’s body odour. They live smoothly together without bothering each other, and it is to the bees’ advantage that the ants protect and defend their nest; maybe, the bees participate in nest defence with their vigilant guards.