The younger, the brighter, the more food 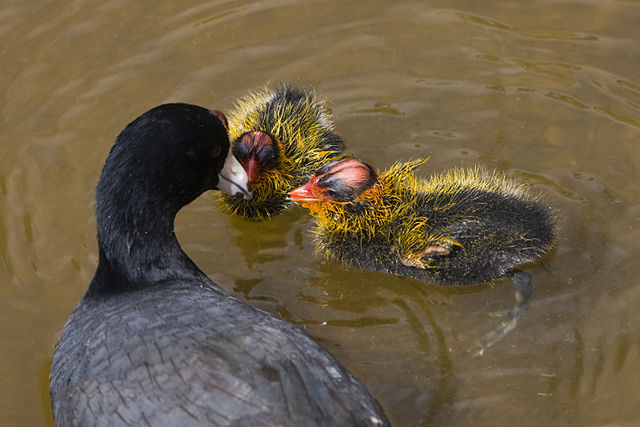 In contrast to their parents, young coots have a striking appearance. Bruce Lyon and Daizaburo Shizuko discovered how their ornamentation helps the parents to optimally feed the offspring.

Young American coots, Fulica americana, have fancy heads: a red beak and bare patches of red skin with papillae, surrounded by a crown of orange-yellow modified feathers. That ornamentation is puzzling; because of predators, you would rather expect young coots to be unobtrusive. Bruce Lyon and Daizaburo Shizuko figured out what function their colourful appearance serves.

If the clutch of a pair of American coots is complete, it is certain that not every egg will result in an independent young. The water birds lay nine eggs per nest on average, and although almost all of these eggs will hatch, only three or four young eventually reach independency. Four chicks is the maximum that the parents can feed. As a consequence, less than half of the chicks can survive.

The case is settled during the first ten days after the last egg has hatched. The young coots leave the nest immediately after hatching and swim to the parents to be fed, every chick trying to get attention. It is an unfair competition, because the siblings do not hatch at the same time; the first chick may be eleven days older than the last. The oldest chicks are larger, not only because they are older, but also because the first eggs laid by a female are larger. It is easy for them to keep up with their parents, while the youngest coots run a high risk of being too slow and starving.

The parents don’t interfere with this rivalry between their young.

But after ten days, things will change, as the researchers had discovered before during their research in Canada. The size of the coot family then is reduced to a number that the parents can handle, and they shift strategies. They are now going to pay attention to the small ones and offer them most of the food that is available. Each parent chooses one of the chicks to favour; a favourite is always one of the youngest.

The eldest chicks also want to be fed, but they are already able to find their own food. They are tousled by their parents when they come begging: they are grasped by the neck and shaken. They then will give up.

In this way, the parents give full attention to the chicks that need it, making sure that all chicks that survived the period of sibling rivalry can grow up. Thanks to this preferential treatment, the youngest chicks in a coot family will gain the same weight as the oldest ones.

The researchers also had observed earlier that the most brightly coloured young were preferentially fed by the parents and more likely to be chosen as a favourite. Now, they link the chicks’ colour to their age. The later an egg’s position in the laying order, they show, the brighter coloured the chick will be. This is probably because the mother adds more dye to the yolk as she has already laid more eggs. So this appears to be the function of the ornamentation: it indicates to the parents which chicks are the youngest and need food aid the most.

Sometimes a coot is extremely aggressive to a chick. In that case, this is not its own young, but another coot’s. Coot females often dump an egg in the neighbours’ nest in an attempt to increase the breeding success. But the intended foster parents recognize such foreign chick and will tackle it hard. Its chance to survive is very small.