Jewel beetles are invisible thanks to gem-like wings 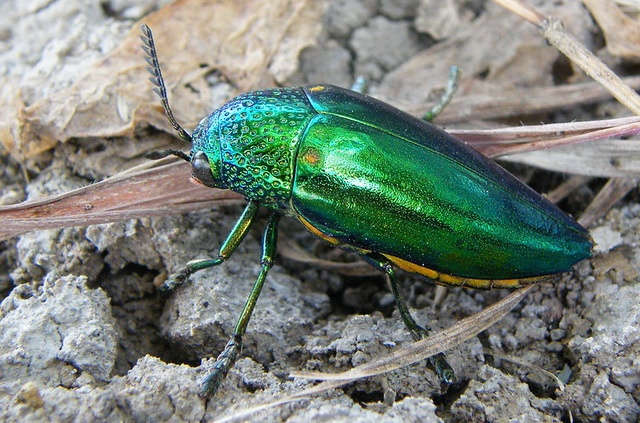 The green jewel beetle Sternocera aequisignata is protected against the gaze of predators not only by its colour, but also by its iridescent shine, Karin Kjernsmo and colleagues demonstrate.

Jewel beetles were often to be seen in the ballrooms of Victorian England. That is, their wing cases, the hardened front wings; they were applied on expensive dresses as decoration and glittered like gems. With such dress, a lady could show up.

The beetle wings are so beautiful because they are shiny and iridescent, that is, their colour changes when they are illuminated or seen at different angles. The entire body of the beetle has that iridescent shine. It is an effect of the nanostructure of its exoskeleton, with multiple layers reflecting light. The wing cases of jewel beetles are durable and colourfast, and it is no wonder that they have often been used in jewellery and clothing; jewellery with jewel beetle wings is still being made today.

Surprisingly, jewel beetles don’t have their sparkling appearance to stand out, but to hide in plain sight, Karin Kjernsmo and colleagues prove.

A well-known jewel beetle is the Asian emerald green Sternocera aequisignata. The beetles are on the menu of birds and should not catch the eye when they dwell in vegetation. Green is a well protective colour. The researchers wondered whether the iridescence makes the beetles still more difficult to detect.

They first wrapped dead mealworms with either a wing case of Sternocera aequisignata or a model. Five different models were used: pieces of resin shaped like a wing and varnished with green, blue, purple or black nail polish, and a high-gloss photo of a wing case that had the different colours, but not the iridescence of real wings. In a forest environment, they pinned the mealworms on plants. It was clear that birds found mealworms wrapped with real beetle wings less often than mealworms wrapped with one of four different wing models. So, wrapped with wing cases, the prey was more safe. Only the black models offered the same safety.

The next question was whether birds had greater difficulty detecting the iridescent wing cases, or whether they refrain from taking them. Human test subjects answered this question. They were asked to walk past plants on which wing cases and the five different models had been placed and to search for the objects. It turned out that the real wing cases were harder to detect than the models, again with the exception of the black ones. On a glossy background, such as a wet leaf, the real beetle wings did not stand out at all.

The conclusion is that the iridescent wing cases of jewel beetles that shine so brightly on ball gowns have a camouflaging effect on plants. Perhaps that explains why iridescent colours are common among insects. Just like the colour black.