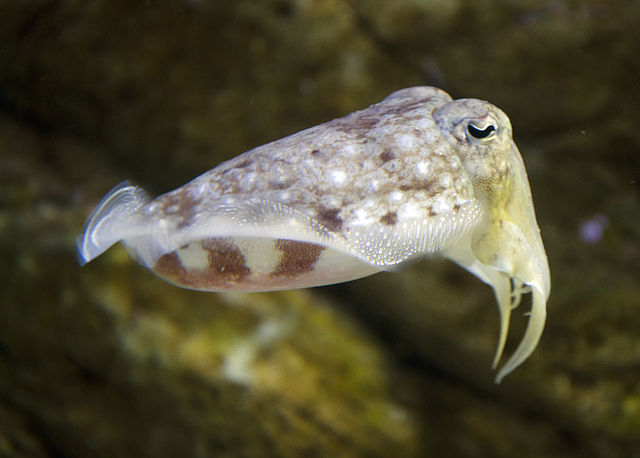 Common cuttlefish exhibits a clear food preference: shrimp. If shrimp will be available at night, it refrains from eating crab during daytime, as Pauline Billard and colleagues show.

The European common cuttlefish Sepia officinalis, which occurs in Mediterranean Sea, North Sea and Baltic Sea, consumes different types of prey, but not with the same eagerness. Shrimp are its favourite food. It likes them so much, that it will skip a crab meal if it expects shrimp to be available later on, as research of Pauline Billard and colleagues revealed.

In the lab, the researchers conducted two experiments. First, they offered cuttlefish, kept in separate tanks, a crab during daytime. Some cuttlefish received an additional shrimp every night, the others were given shrimp only on some nights, in an unpredictable way.
The cuttlefish that received shrimp every night started to lower consumption of crab during daytime, saving room for their favourite food. The animals that were not sure about getting the delicacy at night maintained the consumption of crab during the day, eating enough in any case.
When the routine was reversed between groups – so, cuttlefish that had received shrimp every night changed to an unpredictable regimen and the other way round – the animals modified their behaviour accordingly.

Then a second, more complex experiment was done. The animals again were offered crab during daytime, but now all of them got shrimp every other night. It took some time for them to get used to the regimen, but then they adjusted their behaviour. If they had received shrimp the night before, so when there would be no shrimp the following night, they consumed crab during daytime. Conversely, if there hadn’t been any shrimp the night before, they didn’t eat much crab, expecting to get shrimp the following night.

The animals’ behaviour can’t be explained by their feeding state, because in that case they would have eaten crab when they didn’t eat shrimp the night before, being more hungry.