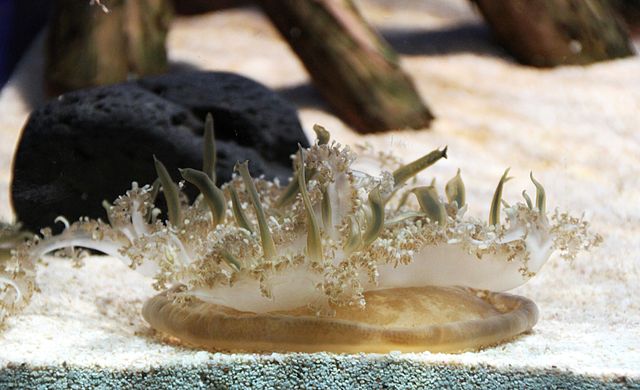 The water around upside-down jellyfish is dangerous for small animals and itching for snorkelers. Mobile cell structures, released by the jellyfish, are responsible, as Cheryl Ames and colleagues show.

The upside-down jellyfish Cassiopea xamachana doesn’t swim like jellyfish normally do, but settles upside down on muddy soils of mangrove forests, seagrass beds or shallow bays, its eight oral arms with exuberantly branched flaps facing upward. These jellyfish occur in warm parts of the western Atlantic Ocean, the Caribbean Sea and the Gulf of Mexico, often in large groups.

The habit of lying on the bottom is not the only odd trait of this animal. It is also unusual in hosting unicellular organisms inside its body, the so-called zooxanthellae. Like plants, these organisms convert carbon dioxide and water into carbohydrates and oxygen, using energy from sunlight. They donate part of the carbohydrates to the jellyfish in exchange for their comfortable and safe accommodation.

The carbohydrates that upside-down jellyfish receive from the resident microorganisms are the main source of energy. But the jellyfish also need proteins. That is why they supplement the diet with animal food.

To capture prey, jellyfish use stinging cells. These cells contain stinging capsules, ‘harpoons’, and are filled with a poison blend; the harpoons are able paralyze or kill small critters. Their stings also scare off enemies.

Upside-down jelly has stinging cells on its oral arms. The animal is pulsating, causing water movements that drive prey to the arms, where it is trapped. But, unlike other jellies, the upside-down jellyfish also is able to sting at a distance. How?

If prey is around or if the jellyfish is disturbed, it releases large amounts of mucus, which contain microscopic spherical bodies with an irregular surface, as the current research shows in detail. The bodies consist of an outer cell layer, with stinging cells and ciliated epithelial cells. The content is gelatinous like the jellyfish itself; often zooxanthellae are present, but whether they are active and provide carbohydrates is unknown.

The cell structures, which the researchers have termed cassiosomes, are produced in large quantities on the jellyfish’s arms. Whenever disturbed, the jelly starts emitting them after five minutes in a mucus cloud and continues for hours. Thanks to the cilia, the spherical bodies are motile. They swim around in the mucus for fifteen minutes and then sink down. They go on rotating and displacing for days, and gradually become smoother and smaller to eventually disintegrate after ten days.

The cassiosomes are capable of killing prey animals, laboratory tests show. Brine shrimp, for example, is often instantly killed upon contact with the cell structures.

While doing their work, the researchers experienced that the water in the test tanks was indeed stinging.

Of all peculiarities that upside-down jellyfish possess, this may well be the strangest: loose jellyfish pieces that remain alive for days independently of the main body, move around and help capture prey and scare enemies. The researchers now know that a few closely related jellyfish species release similar small ‘grenades’.

The cell masses in the mucus of upside-down jellyfish had been seen before, at the beginning of the twentieth century, but were thought to be parasites. Nobody could not fancy by that time that it was jellyfish tissue.