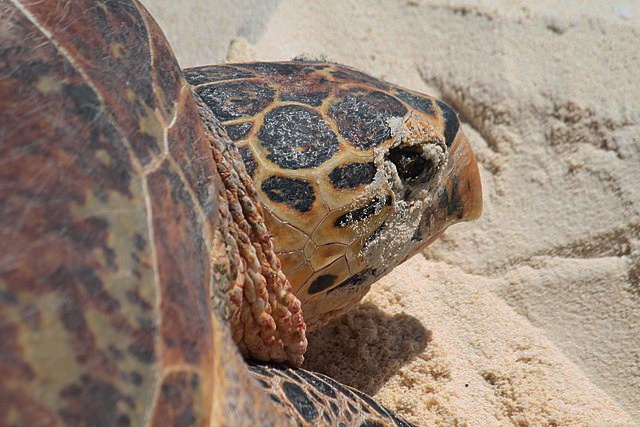 Sea turtle eggs, buried in a sandy beach, are an attractive meal for some animals. Turtle mothers confuse these enemies with a series of decoy nests, Thomas Burns and colleagues think.

For a sea turtle female, it is physically demanding to lay her eggs. She crawls from the sea onto a sandy beach, selects a suitable place, digs a hole, lays dozens of eggs in it and refills the nest cavity. You would expect her to return to the sea as soon as possible, where she can move more easily and is safer.

But she doesn’t, as Thomas Burns and colleagues report. She first scatters sand around the refilled egg chamber. And then she starts to travel a convoluted path over a large area, further and further away from the nest, stopping periodically to scatter sand again. Only after having done this at several scattering stations, she will leave the beach. What is this extra effort good for?

Sea turtles lay their eggs on tropical and subtropical beaches worldwide; afterwards, they don’t look after their clutches any more. The eggs develop in the warm sand, and the young turtles dig through the sand and crawl to the sea. All a mother can do for her offspring is to make sure not to betray the location of the nest, where she has dug in the sand, to predators. The tasty eggs are liked by various animals, including gulls, foxes, raccoons and wild pigs.

The researchers, who worked on the islands of Trinidad and Tobago, point out that female sea turtles behave according to a fixed pattern until they have finished the nest. Thereafter, their movements become unpredictable. They take a random route on the beach, changing direction at each station.

Research also shows that scattering sand is a time-consuming and exhausting activity. The hawksbill sea turtle puts in as much energy as it does in excavating a nest hole and refilling it, and for the leatherback it is even the most strenuous activity. The hawksbill often scatters sand at more than ten stations, the leatherback may stop more than twenty times. Despite the great effort, the turtles persist: at the last stop they are as active as at the first.

The researchers’ conclusion: the sea turtles create a series of decoy nests. An natural enemy looking for eggs will mostly dig in vain and lose a lot of time. As a consequence, real nests are less easily found and therefore safer.