Snake and frog wait for each other to initiate action 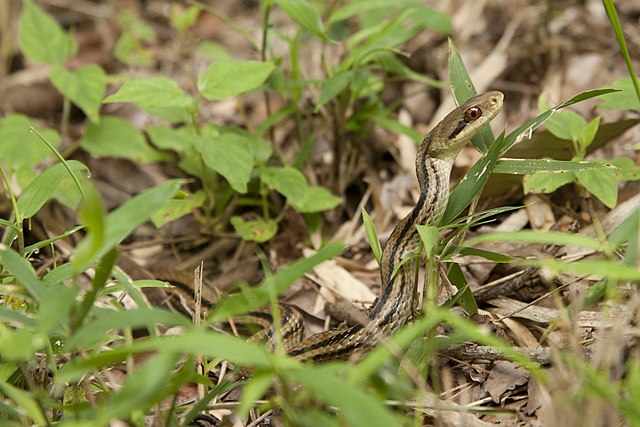 When snake and frog meet, an endurance game begins. The one that moves first takes a risk, as Nozomi Nishiumi and Akira Mori show. If the snake attacks, it will see its prey escape. If the frog jumps, it will be captured.

As the snake slowly slides closer, the frog remains motionless. Doesn’t that frog perceive the danger? Or can’t it flee, because it is frozen with fear? Neither, Nozomi Nishiumi and Akira Mori write. The best strategy is to remain motionless as long as possible.
In Japan, the biologists investigated interactions between the Japanese striped snake Elaphe quadrivirgata and one of its prey species, the black-spotted pond frog Pelophylax nigromaculatus. Tension is mounting, as staged encounter experiments showed, because neither animal will take action. And with good reason.

Of course, the frog could initiate flight by jumping away if the snake approaches. But then it is at a disadvantage. Because after take-off kicking, it can’t change his speed and direction. The snake will respond immediately and try to intercept the frog in mid-air, with a good chance of success. So, it is best for the frog to remain motionless.

Also, the approaching snake should refrain from initiating strike behaviour at the frog. Once it has started projecting its head, it can no longer adjust the direction. The frog can evade the strike by jumping away, and chances are high that it will succeed. The snake can make another attempt to capture the frog, but it looses some time because it has to assume the correct posture.

So, the opponents wait for the other to initiate action. The one that gives up first, takes a risk. Sometimes it is the frog that takes pre-emptive action and jumps – with a high chance of being caught. Other times, the snake launches into a strike – and the frog is likely to escape.

But if both predator and prey persevere, something must happen in the end. At some point they have to switch from waiting to taking action. When the snake has approached the frog to a distance of about six centimetres, the prey has no chance to escape anymore; the snake can successfully grab it. The frog should not wait that long: just before the snake is dangerously close and about to strike, it must jump. That can go wrong, but at least, escape is not yet excluded.

It is a game of patience, but also a game of life and death. In that sense, the tests in which snake and frog are forced to face each other are somewhat cruel, as some frogs were eaten. In nature however, as the researchers state in an ethical note, this is daily practice.