Ladybird cannot deal with all enemies at once 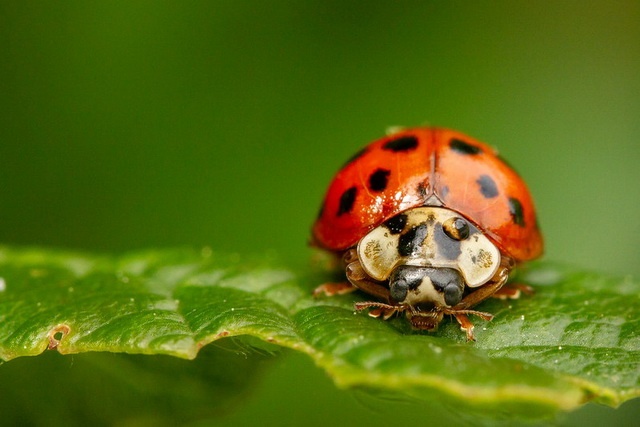 When a ladybird has to defer predators regularly, it is less able to resist pathogens and parasites, Michal Knapp and colleagues write.

When threatened, ladybird beetles try to avoid being eaten by excreting a yellow, smelly and bitter-tasting liquid from their legs. This reduces the appetite of hungry insects, lizards, birds or small mammals. The liquid is haemolymph, the insect variant of blood. You can see the phenomenon by provoking a ladybird.

But you shouldn’t do that, because ‘reflex bleeding’ decreases the ability to fight pathogens and parasites, as Michal Knapp and colleagues report.

They conducted experiments with the harlequin ladybird, Harmonia axyridis. The species originally lived in East Asia, was introduced in Europe and North America and nowadays also occurs in South America and Africa.

Haemolymph is an expensive means to scare away enemies. It contains nutrients, as well as blood cells, proteins and other compounds that ladybirds need to eliminate pathogens and parasites. The harlequin ladybird uses, among other compounds, the substance harmonine, which has a strong antimicrobial effect. Each bleeding causes a loss of these valuable components.

To measure the effect of this loss, Knapp triggered reflex bleeding in ladybirds twice a week, during three weeks. Contrary to his expectations, the treatment did not affect the survival of the beetles, and they did not lose weight.

He also, during a month, triggered newly hatched females daily to bleed, and found that their reproductive capacity was unaffected. In their first month of life, they produced as many eggs as females that were untreated. They started laying eggs a few days later, though, especially after losing a high volume of haemolymph. That may be of little importance, however, as the beetles live for months.

But bleeding, the defence mechanism against predators, comes at the expense of the resistance to other enemies, as it turned out. The concentration of blood cells and proteins in haemolymph had decreased. The concentration of harmonine and similar compounds has not been measured, but other research indicates that it also will have decreased.

Indeed, haemolymph of ladybirds that bled was found to inhibit bacteria less strongly. Probably, these ladybirds are less resistant to parasites as well, as blood cells take part in defence, but this has not been investigated.

Ladybirds successfully deploy constituents of haemolymph against all types of enemies – but they cannot fight them all at once at full power. If they have to deal with hungry predators frequently, their resistance to pathogens and parasites is reduced.