Thanks to black irises, female guppy escapes from predator 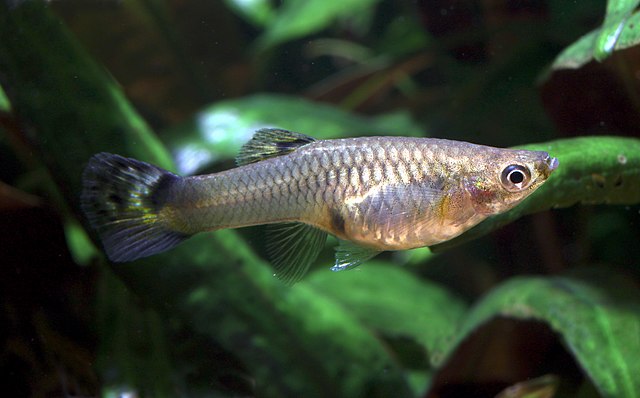 By drawing the attention of a predatory fish to the eyes and turning the head away as soon as it strikes, a guppy female manages to evade. Robert Heathcote and colleagues report this hitherto unknown escape strategy.

When Trinidadian guppies detect a predatory fish, they will approach and inspect it to find out if it is hungry and dangerous. The colour of their irises may change when they do; normally the irises are silver, but then they often turn black, making the eyes more salient. It doesn’t seem profitable to draw an enemies attention to the head, so Robert Heathcote and colleagues wondered why guppies blacken their eyes. Is it to deter the enemy? Or is it to divert its attack? But then, how does it work?

By conducting a series of experiments, they found the answer: the colour change is part of a successful escape strategy.

Wild Trinidadian guppies, Poecilia reticulata, live in northeastern South America. One of their enemies is the cichlid Crenicichla alta, a predatory fish that ambushes its victims.

First, the researchers exposed wild guppies to a visually-realistic model of this predatory fish in a tank, and observed whether they blackened their eyes. As it turned out, large individuals do. These are mostly females, which are larger than males on average.

The predatory fish is not deterred by those dark eyes, as became evident from the next series of experiments, this time with live predatory fish and models of guppies with either black or silver irises. The cichlid attacks guppies with black eyes as often as those with silver-coloured irises. So, the first possible explanation fails.

The researchers also investigated at what target the predator lunges when attacking its prey. When irises are silver-coloured, the predator aims at the broadest part of the body, they discovered. In dark-eyed fish, the attack is diverted to the front. So, colour change of the irises appears to be a diversion strategy. But the predatory fish grasps both types of models, with black and silver irises, just as easily, so a guppy doesn’t benefit from a dark eye colour in itself.

However, colour change does help when combined with a critically timed evasive manoeuvre, as the last tests showed. In these tests, living guppies were placed in a tank with a living cichlid, but were separated from it by a transparent acetate screen, keeping them from danger. From the movements of the fish, filmed with a high-speed camera, the researchers were able to calculate, for each attack, the probability that the predator would have caught the victim in real conditions, without screen.

The moment the predatory fish strikes, a guppy quickly pivots around an imaginary vertical axis, accelerates and swims away. The imaginary axis runs through the broadest part of the body (more precisely, through the centre of mass), roughly the point that the cichlid aims for in a victim with silvery, less conspicuous irises. This part of the body hardly moves during the rotation. If the predatory fish directs its attack at that point, its chances to succeed are high, as the analysis showed.

The head, on the other hand, immediately leaves its position during the rotational movement. If the predatory fish charges at that part of the victim – like it does in a prey with black irises – it usually misses out.

By blackening its eyes, a guppy thus increases its chance to escape with a quick manoeuvre. The researchers compare this escape strategy – drawing the enemy’s attention to a particular point and then moving it quickly away – with the behaviour of a bullfighter, the matador with his red cape. Such escape strategy was previously unknown in animals.

For the strategy to be successful, the distance between the eye and the broadest part of the body must be sufficiently large. Males are too small. Males also have a striking eye-sized black spot on their body, which makes it more difficult to draw the predator’s attention to the head. So it makes no sense for males to blacken their irises in presence of a predatory fish, just increasing the detection risk. Accordingly, they don’t.

But females can trick their enemies by making their eyes stand out. The predator aims for her attractive eyes. And they’re gone.