When the eggs are brown-coloured, hoopoe male is more helpful 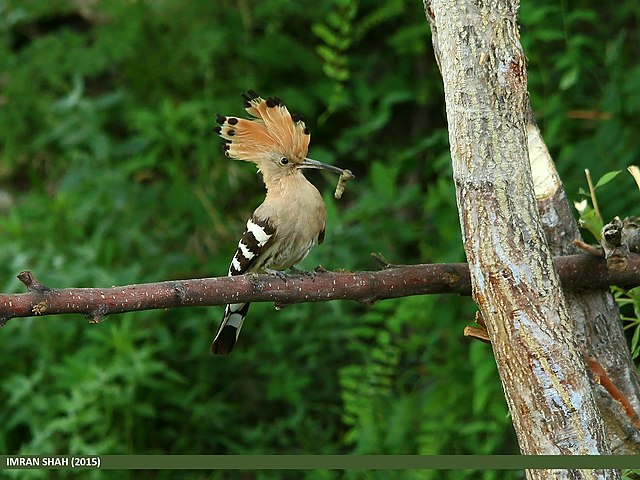 A brooding hoopoe female repeatedly smears a dark substance from her preen gland onto the eggs. The browner the eggs, the more helpful her partner will be. That is because the colour has meaning to him, Silvia Díaz Lora and colleagues think.

During incubation, a dark-coloured, foul-smelling substance is produced in the preen gland (uropygial gland) of hoopoe females, which is greatly enlarged during this period. It was already known that a female smears the material onto the eggs with her beak. The colour that the eggshells get as a result determines how frequently the male will feed her, Silvia Díaz Lora and colleagues now report.

This has to do with the hatching success of the clutch that is to be expected. If prospects are good, he will invest a lot. If not, he will save energy for the next breeding event. The egg colour is an indication of the expected success.

In the breeding season, hoopoes establish a territory, form pairs and breed in tree cavities. Both parents take care of the nestlings until they fledge. But before nestlings appear, the clutch has to be incubated, which is the females’ task. They don’t leave the nest during this period, and they also stay with the young during the first week. Their partners provide them with food.

The preen gland secretion that the females spread onto their eggs protects the embryos, thanks to bacteria that live in the gland during the breeding period and produce compounds that inhibit pathogenic bacteria. When an egg is covered with gland secretion, pathogens are prevented from penetrating the egg shell. This increases the chance the eggs will hatch, and the higher the density of beneficial bacteria, the better the result.

The mother smears the antimicrobial substance onto each egg soon after laying and repeats the procedure until the young hatch. Microscopic cavities on the eggshell enhance adhesion of the substance. Newly laid eggs are light bluish-gray, but they turn dark and greenish-brown by the treatment.

Embryos of other bird species are protected by an extra layer in the egg. But the hoopoe has its own, unique way.

Later on, also the nestlings’ preen gland will produce the brown secretion. The substance has another function: the stench deters predatory enemies. Outside the breeding season, the preen gland of females and fledged young, like that of males, is small. The bacteria are disappeared and the gland produces a white, colourless fat, which the birds use to preen their plumage.

Among hoopoe females, there is a difference in the colour of the substance they paint the eggs with. And what is important for this story: that difference is related to the amount of bacteria that are present in the preen gland. Without bacteria, the substance is red, with bacteria it is brown. The browner the colour, the higher the bacterial density – and the stronger the antimicrobial activity.

That means: the browner the eggs, the better the embryos are protected against infections.

When bringing food to their mate, males see the colour of the eggs. The researchers wanted to know whether they adjust their feeding effort to this colour. On the basis of video recordings at a number of nests, they investigated at what frequency the male came to the nest and what prey he carried. With a spectrometer, they measured the colour of the clutch and they sampled the female’s preen gland contents to assess the density of bacteria.

Results are appealing. If the eggs were brown-coloured, the male frequently fed his partner while she was incubating. If the eggs were more reddish, he only worked this hard if her body condition was good. Apparently, hoopoe males are willing to invest a lot in a clutch if it is promising because the mother colours the eggs with a potent antibacterial material or because she is healthy.

Once the eggs had hatched, father’s behaviour no longer depended on the egg colour. There are probably other factors that determine his diligence at that stage, such as the begging behaviour of the young.

But there is no proof yet that this story – if eggs are brown, a hoopoe male will work harder – is really true. An alternative possibility is that a father who brings in more food for its partner simply has a richer territory than a father who brings less. Thanks to lots of available food, the mother is in better condition and able to maintain a larger population of bacteria in her preen gland, which colours the secretion brown and gives the eggs good protection. So: the quality of the territory may determine both how much food the male brings in and the colour of the eggs.

To find out what is true, the researchers would have to do experiments in which they paint hoopoe eggs darker and see whether males respond by working harder. For now, it looks like they adjust their effort to the chance that the eggs will hatch successfully. But only if such experiments corroborate this, we can be sure.