Bird doesn’t attack the spider, but its web decoration instead 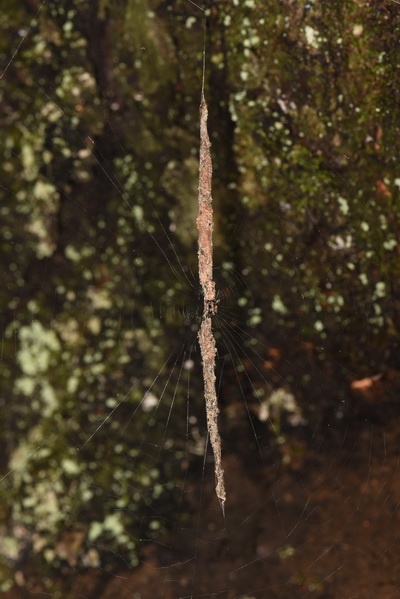 Thanks to a striking web decoration, the spider Cyclosa monticola escapes from hungry birds, as Nina Ma and colleagues show. The birds’ attacks fail.

The spider Cyclosa monticola, which is common in East Asia, constructs an elaborate web. Not only does it consist of sticky threads, but it also carries a striking, linear band of trash, containing moults, prey remains, and pieces of leaves and stems. According to Nina Ma and colleagues, this detritus decoration diverts attacks of predators, especially birds, away from the spider.

The spider is in the centre of its web, hardly visible in the decoration band, which extends in both directions. The animal’s colour is similar to the colour of the decoration. Birds cannot distinguish the colours of the spider from that of decorating trash.

The researchers wondered whether Cyclosa monticola, a tasty snack for many birds, is safer as a result. In order to find out, they exposed spider webs to domestic chickens chicks, one web per chick. Some chicks were given a web with the resident spider present in it; from half of these webs, the researchers had removed the decoration with fine scissors without damaging the web. For comparison, other chicks were given either an empty web or a web with decoration only. Most chicks quickly pecked at whatever (spider and/or decoration) they saw. The researchers were interested in their first target.

Spiders that had been robbed of their web decoration were grabbed by the chick in almost all cases. Spiders that had kept their decoration survived much more frequently. In this situation, the chick usually did not peck at the spider, but at the trash, and the spider dropped down quickly to escape. Obviously, the decoration did confer safety.

So, web decoration is an effective defence strategy.

The question now is whether insect prey will not avoid the structure. After all, the trick of a spider web is that insects don’t discern the threads and get caught in the web. But research on another spider species that adorns its web shows that insects are attracted to the decoration – and get stuck in the web. The web decoration of Cyclosa monticola may also have this effect; if so, it would have a double function.