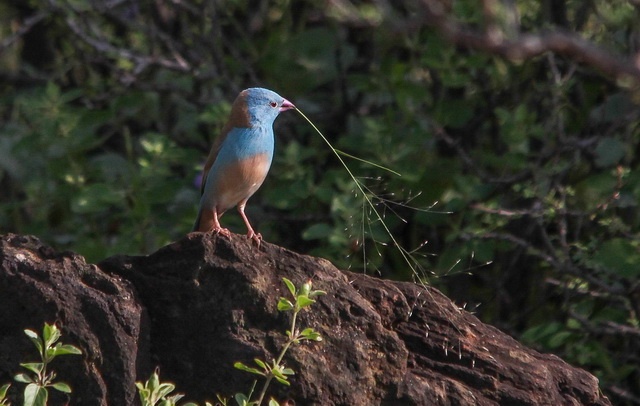 In blue-capped cordon-bleu, male and female show their commitment with song and movement. With a high-speed camera, Nao Ota revealed the tap dance that is hidden within.

The complex courtship displays of the blue-capped cordon-bleu, an estrildid finch species from East Africa, are nice to observe. Holding a piece of nesting material in the beak, the bird is singing and bobbing up and down. What we don’t see is that it rapidly stamps its feet several times during bobbing. Nao Ota made that ‘tap dance’ visible by recording the courtship with a high-speed camera. Earlier, she had filmed birds in the lab, now she also has footage from the field.

The birds live in monogamous pairs. Male and female look similar, but the male has more blue plumage than the female. Both sexes give song and dance performances.

Blue-capped cordon-bleus perform most intensively when their mate is present on the same perch, but they don’t perform a duet. In contrast to humans, they may be able to see the fast tapping. Feet stamping produces sound, as Ota had already shown, and the birds probably feel the vibrations it causes in the perch on which they are sitting.

In presence of a conspecific bird besides the couple, they sing and dance more frequently. The performing bird then points its tail towards its mate. This seems to mean that the display is directed to the partner and to express commitment.

Hear the song and watch the tap dance on YouTube