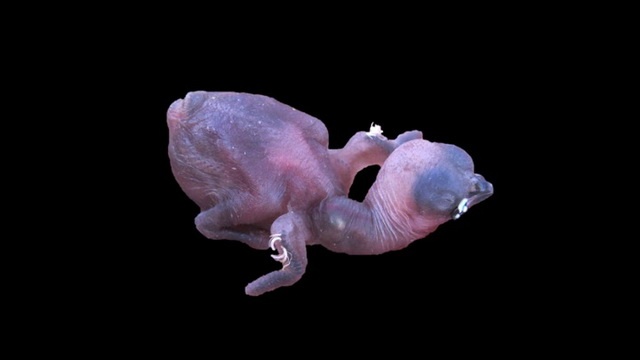 In order not to stand out in the nest in which they grow up clandestinely, Vidua nestlings mimic the young of the host parents. They perform very well, Gabriel Jamie and colleagues report. But some slight discrepancies exist.

African whydahs and indigobirds, Vidua species, are brood parasites like the cuckoo. They lay their eggs in the nest of other bird species, in this case grassfinches, and have the host parents raise their young. Vidua finches are unable to provide parental care. But these brood parasites do much less harm to the host families than a cuckoo, because young Viduas don’t eject other nestlings from the nest. The host parents take care for their own offspring, but have some extra, foreign young.

The foreign nestlings should not stand out, otherwise the tricked parents will notice the deception. It was already known that Vidua young resemble their host parents’ young. With special computer software, Gabriel Jamie and colleagues now show how successful the mimicry is. 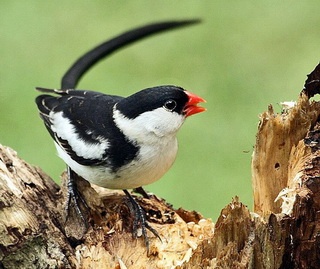 The Vidua genus contains nineteen species. In the breeding period, the males are real beauties, while the females are inconspicuous and difficult to recognize. Jamie took a closer look at three species: pin-tailed whydah (Vidua macroura), broad-tailed paradise whydah (Vidua obtusa) and purple indigobird (Vidua purpurascens). They are host-specific, each Vidua species has a single host species. Jamie compared the Vidua nestlings to that of their respective host parents and of a number of other grassfinch species.

Young grassfinches (Estrildidae) have ornamental mouth markings that become fully visible when they open their beaks; this ornamentation in unusual among birds. Each grassfinch species has its characteristic pattern, colour and structure.

Nestlings of the breeding parasites accurately mimic those characteristic markings, is the conclusion of the research. An analysis with pattern recognition software shows that the pattern is similar to that of their host parent species. The colours match well too. Vidua nestlings also cleverly imitate the begging calls and postures of their foster siblings.

Previous research, by Michael Sorenson, had shown that the nineteen species of whydahs and indigobirds are much younger than their hosts in an evolutionary sense. The idea is that their common ancestor switched to a brood parasitic lifestyle with a grassfinch as host parent.

Speciation could then occur quickly. Whenever a Vidua female happens to lay eggs in the nest of another host, a separate group associated to that new host arises, because Vidua nestlings imprint on the song of their host father. Each grassfinch species has its own characteristic song. When grown up, Vidua males will mimic the song of their host, and females are attracted to this song. Also, females select a nest of the host species they were raised by to lay their eggs in. The group turns into a new species.

The nestlings then become more and more similar to the nestlings of the new host through an evolutionary adaptation process. Because the more a Vidua nestling resembles the young of its host parents, the more likely they are to accept it and care for it, increasing its survival chance.

And as a matter of fact, the resemblance between foreign and own young in a parasitized grassfinch’s nest turned out to be striking. But it is not entirely perfect. Small but consistent differences exist. Perhaps the foreign nestlings are (yet) unable to fully mimic their nest mates. And apparently, they are doing well enough: the host parents accept them.

But there may be another explanation for the discrepancies, the researchers write. Nestlings of pin-tailed whydah, for example, have spots in the beak that are slightly larger than those of their foster parents’ young, common waxbill (Estrilda astrild), and their begging calls are slightly extended. Unlike a waxbill nestling, they wave a wing under their open mouth while begging.

So, these Vidua nestlings are slightly exaggerating their host’s begging signals. And perhaps the host parents favour them as a consequence. An intriguing thought.