As soon as a pug-nosed tree frog male starts calling, other males in the neighbourhood follow suit. After a short time of noise, it is quiet again for a long period. Henry Legett and colleagues found an explanation for this pattern.

In pug-nosed tree frog, aka Panama cross-banded tree frog (Smilisca sila), males face a difficult dilemma. The frog lives in Central America. In order to reproduce, males have to attract a female by calling, which they do in the evening from a location along or above a water stream. But their calls reveal their presence not only to females, but also to their natural enemies, the fringe-lipped bat (Trachops cirrhosus) and midges. The enemies use sound to localise their victims.

According to Henry Legett and colleagues, the frog males reduce the risk by creating an auditory illusion in their enemies.

That illusion arises by the way in which animals, including humans, process sound. If, with a short interval (milliseconds), two or more identical sounds are produced by sources that are close to each other, we will perceive this as one sound, which originated at the source that uttered it first. So, we ignore reflections that occur in a furnished room or a forest, hearing sounds clearly as a consequence. The priority given to the first sound is called the precedence effect. 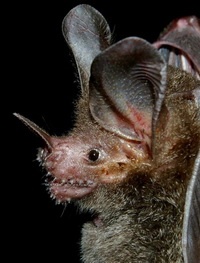 Because of this effect, pug-nosed tree frog males that call nearly synchronously with another male, can hide from their enemies’ ears. And, according to playback experiments by the researchers, this works out pretty well. They used two speakers that almost simultaneously produced the call of a male; alternately, one or the other speaker was leading. The response of bats, midges and female frogs was observed.

As results suggest, a male that closely follows another male calling runs a smaller risk of being captured by a bat and attracts less mosquitoes than the predecessor.

So following pays off – at least as far as safety is concerned. But what about reproduction? If females also have more difficulty finding followers, males won’t benefit from auditory hiding.

But as it turns out, chances are not too bad. The precedence effect is strong in other frog species, such as the túngara frog (Engystomops pustulosus), which inhabits the same region and whose males also call at night, but not synchronously. Compared to túngara frog females, the effect is weak in pug-nosed tree frog females. They chose following males less often than predecessors, but the difference is small. Also followers are approached by females.

The question remains why any tree frog male is the first to start the synchronous calling. After all, being the predecessor, its attractive power to females is only a bit stronger, while it is more likely to be eaten and bitten.

On the other hand, someone has to do it. If all males would remain silent, nothing happens. But the restraint of males to be the first explains the long periods of silence, interspersed with short, sporadic bouts of calls.