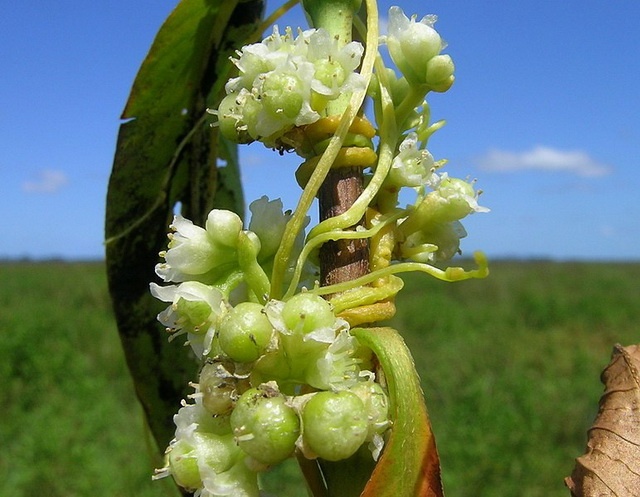 Dodder, a plant that parasitizes other plants, flowers almost simultaneously with its host. The parasite takes up the host’s signal that activates flower development, Guojing Shen and colleagues show.

A plant may be covered with a tangle of thin, sticking threads. That is a bad condition for the plant, because those threads are stems of a parasitic plant: dodder (Cuscuta), of which about two hundred species exist worldwide. Most of them thrive on several host plant species. And whether a host flowers sooner or later in the season, dodder joins in and develops its flowers simultaneously. Guojing Shen and colleagues discovered how Australian dodder (Cuscuta australis) manages to synchronize its flowering time with that of its various hosts.

Once young dodder plants get hold of a host plant after germination, their roots disappear, so they cannot take up water and nutrients from the soil anymore. Also, they don’t have green leaves that take carbon dioxide from the air and convert it into carbohydrates with the help of sunlight, like other plants. Everything they need, they extract from the host, round the stems of which they wind extensively.

Annual dodder species, like Cuscuta australis, first grow, then flower and eventually die. The parasite benefits most from its host when it flowers simultaneously. Because if it blooms earlier, it will not reach the size it could have reached by growing longer, and as a consequence it will produce fewer flowers and fewer seeds than it could have produced. But if it postpones flower development for too long, it will be short of nutrients during flowering. Because the host then channels as much nutrients as possible to its own flowers and seeds, leaving less to circulate in phloem and xylem from which dodder taps.

So, dodder has to adjust its flowering time to that of its host.

Most plants regulate their flowering time by tracking changes in day length. When it is about time for flowers to appear, the leaves produce the protein FT (flowering locus T), which moves through the phloem. This protein switches on flower development; it is, in other words, a mobile flowering signal.

Dodder would not benefit from having a flowering signal of its own. As it has to synchronize with its host, it must be flexible. It is therefore not surprising that it does not appear to have functional FT protein. There is a dodder variant of the protein, but it does not activate flowering. How then does the parasite regulate its flowering time?

By eavesdropping on the host’s flowering signal, Shen writes. He investigated flowering in Australian dodder, but the story will apply to other dodder species as well. To European dodder (Cuscuta europaea), for example, which can be found in Western Europe growing on nettle and hops; or to lesser dodder (Cuscuta epithymum), or hellweed, that grows on heather, broom, gorse, thyme and other plants.

It was already known that the parasite not only extracts water and nutrients from the host plant via haustoria, but that also several biologically active substances are exchanged.

Including the FT protein.

And so the flowering time of the parasite will coincide nicely with that of its host. Eavesdropping is a perfect method for alignment.

Watch the growth of fiveangled dodder (Cuscuta pentagona, from North America) on video