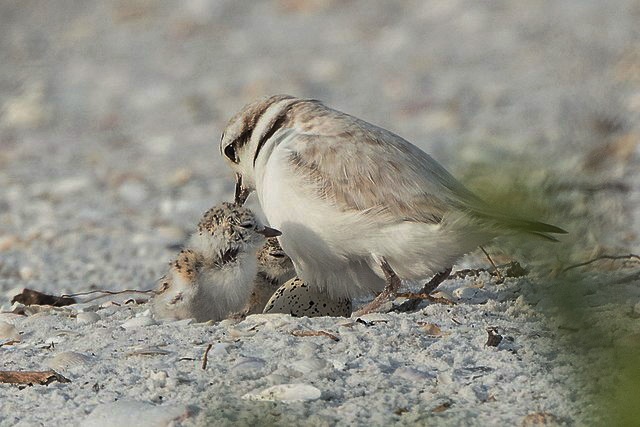 A successful marriage triggers divorce, at least in plovers. That is because a parent that deserts may achieve higher reproductive success, Naerhulan Halimubieke and colleagues noted.

A bird male and female that successfully raised young had better stick together, you might think, as they have proven to be a good team. And after a disappointing breeding result, it is best for them to split up and find another mate, with which things may go better. Such is the behaviour in most species of birds in which pairs form to breed.

But in plovers, it is the other way round, Naerhulan Halimubieke and colleagues write. A pair of plover parents often will divorce after successfully producing chicks. And after nest failure, male and female stay together to try again. For these birds, this is the best strategy.

The researchers had previously found this pattern – divorce if successful, stick together if failing – in the snowy plover Charadrius nivosus, a ground-nesting bird which lives on sandy beaches. A clutch consists of three eggs in a shallow scrape, which are incubated by both parents. When the chicks hatch, they leave the nest immediately. They find their own food and only need warmth and protection from their parents. A single parent can easily provide this. It is therefore not necessary for both parents to stay with the young until they are completely independent, after about a month.

That is why one of the parents may leave its successful family to find a new mate and initiate another brood. Deserting parents gain time, taking advantage of the breeding season as much as possible; their behaviour results in more offspring on average within a breeding season.

Females desert more often than males, probably because there is a small surplus of adult males, so that on average, females meet a new mate sooner.

A completely different situation arises when a snowy plover brood fails, which in most cases is caused by a predator that detected the nest. The best strategy for the parents in that case is to stay together and start a new nest immediately.

Now, this appears to apply to other species of plovers as well, all of them shorebirds. Halimubieke and colleagues examined eight species. Populations with greater breeding success exhibit a higher rate of divorce within a breeding season than populations with less success, they noted. And within populations, couples with a successful clutch split up more often than couples that see their clutch fail.

Also over years, these birds are not necessarily faithful to their mates. When a new breeding season is coming, they start to nest as soon as possible without worrying too much about mate selection. Having as much offspring as possible – that’s the most important thing.